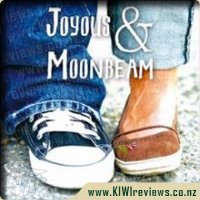 Two of the most unlikely people meet in the most unlikely place. Joyous calls her Moonbeam. When you're fifteen life can make you angry; and families can get seriously messed up. But Joyous has the knack of working things around a little. He is about to teach Moonbeam what family is really all about and it will transform her in every possible way.

A Kiwi Day Before Christmas
Rating: 10.0

Joyous and Moonbeam, this is a story about a fifteen year old girl, who after a couple of bad decisions, has to do some voluntary work where she meets Joyous. Joyous is a thirty-something year old man who has an un-named mental disability (though we do learn what caused his mental state later in the book).

I liked the idea of this book but what I expected from it didn't really come to fruition, and I was left feeling kind of let down with the ending which wasn't really an ending. The final page of the book left me feeling rather as if someone had ripped out the last couple of pages of the book and that I would never know what had happened, which I assume is what the author wanted and that the reader would hope for the best, but it left me feeling a bit flat and for this I would not read the book again.

The book switches style several times throughout. We spend time reading from Joyous' point of view, letters from his mother addressed to him, time spent from Ashleigh/Moonbeam's point of view and then moments where we have Joyous and Moonbeam talking to each other. It took me a bit to get into the writing style of Joyous, but once I did I rather enjoyed his parts and the conversation parts, yet there was little else that I enjoyed.

Had it not been for Joyous this would have been a book that I didn't like, but he makes it worth the read and I can easily picture Joyous out there in the world always seeing the silver lining in ever little thing.

When Alfie Bloom inherited a castle and a centuries-old magic, his dull and lonely life was changed forever. But Alfie's new life has come with dangers he never could have expected. When Ashford the butler is kidnapped in the middle of the night, the castle comes under threat from a terrifying enemy. Trapped inside with only his twin cousins and best friend Amy, it's up to Alfie to defend his inheritance and prevent a terrible fate from befalling the whole of England!