« Juan Vesuvias - I Am Your Deejay review

ProdID: 7952 - Nightflyers and other stories
Edited by George R.R. Martin 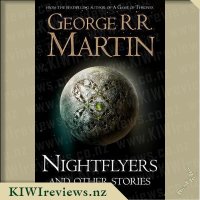 Disclosure StatementFULL DISCLOSURE: A number of units of this product have, at some time, been supplied to KIWIreviews by the company for the purposes of unbiased, independent reviews. No fee was accepted by KIWIreviews or the reviewers themselves - these are genuine, unpaid consumer reviews.
Available:
from May 31st 2018

Nightflyers and other stories product reviews

When a scientific expedition is launched to study a passing starship from a mysterious alien race, the Volcryn, the only ship available is the Nightflyer, a fully autonomous vessel manned by a single human. But Captain Royd Eris remains locked away, interacting with his passengers only as a disembodied voice - or a projected hologram no more substantial than a ghost. Yet that's not the only reason the ship seems haunted.

The team's telepath, Thale Lasamer, senses another presence aboard the Nightflyer - something dangerous, volatile, and alien. Captain Eris claims to know nothing about the elusive intruder, and when someone, or something, begins killing off the expedition's members, he's unable - or unwilling - to stem the bloody tide. Only Melantha Jhirl, a genetically enhanced outcast with greater strength, stamina, and intelligence than other humans, has a chance of solving the mystery - and stopping the malevolent being that's wiping out her shipmates. But first, she has to keep herself alive.

Also included in this collection are five additional classic tales by George R.R. Martin that explore the wonders of the future and the dark corners of the human mind.

So... George went and wrote himself another set of tales (quite some time ago) and someone decided it would make a great TV series. Apparently, Netflix/SyFy have bought the rights to the title tale - Nightflyers - and are going to make a multipart series out of it. (Rumours have it that it could be anywhere from 4-12 episodes.) So... is this a space-based runaway success like GoT, or is it going to be a bit of a lame duck, towed along by his name alone? Who knows... but the base story has certainly got all the hallmarks of something that should go well on the big screen in the same vein as The Expanse series by "James S.A. Corey" - the pen name of two gentlemen, one of whom is, of course, George's personal assistant, Ty Franck.

So... the book. While I very much enjoyed the title story, despite it's descriptive gore and slightly OTT tension notes, it was actually the other five stories that really made this book a golden moment for me. I have always enjoyed sci-fi and fiction from the 70s, and all five were written pre-1980 - when Nightflyers was written.

"Weekend in a War Zone" takes us into a world where the term "weekend warrior" is quite literal, and people pay large amounts of money to join a corporate team and fight to the death in a literal war zone. Think paintball, upsized, with extra insanity and a generous side of mortality. This one, more than the others, stuck with me well after I put the book down because of how big a shift the main protagonist undergoes in his mindset. Despite being the shortest story in the collection, it still managed to carry within it an impact that belies its mere 26 page length.

If you have ever had to work with a group who seemed so dull you had to do all the thinking for them, you'll empathise with "Override" - a tale of a man working hard with a crew of animated corpses to dig rare minerals out of the soil on an alien planet, and the trial he has to face when Big Business comes into his turf. At 41 pages, it's not a long tale, but it speaks to any small business owner trying to make a crust in the midst of bigger predators.

I have to admit, I was not a great fan of "And Seven Times Never Kill Man" - it spoke too much of the evil in a religious zealot's heart, and brought forth too strong a parallel with the various conflicts that have raged across the Middle-East region for decades. I personally found it profoundly disturbing, and I leave it for you to read and decide for yourself.

The final tale - "A Song for Lya" - is profoundly alien, and all the more disturbing for that. However, unlike the previously mentioned tale, I didn't find this disturbing in an unpleasant way, it was simply too alien for that. It's an odd tale, and doesn't feel like it has any hidden moral or message, other than "look after those you love, and respect their life-decisions no matter what". I suppose it could be a way to open closed minds to the reality of the gender revolution and awakening we're undergoing at the momeht... but it could equally be just a tale of aliens strangeness and how some people will fall into anything that offers them hope, or a moment of clarity. Maybe it's warning about joining a cult, for all I know. No matter what is hidden within it, it was unique and worth reading just for something different and odd, where humanity is neither the angel nor the demon, but just another rider on the cosmic bus.

Overall, this was a remarkable collection, from an author I would never have associated with this genre had they not been republished within my adult lifetime. Most of these stories were written and first published before I was in my teens, which is when I started reading sci-fi and fantasy, but back then I was more into robots and dragons than tales like these. I am curious to see whether Maerican TV is going to make a successful adaptation of Nightflyers, or whether they will somehow manage to twist it into a parody of the source material and ruin it entirely.

Darkus can't believe his eyes when a huge insect drops out of the trouser leg of his horrible new neighbour. It's a giant beetle - and it seems to want to communicate.

But how can a boy be friends with a beetle? And what does a beetle have to do with the disappearance of his dad and the arrival of Lucretia Cutter, with her taste for creepy jewellery?