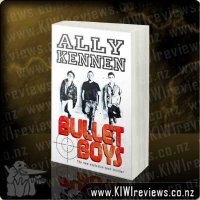 Alex is a crack shot. His gamekeeper father trained him well.

Levi would rather pull a girl than a trigger.

Max is a bomb about to go off.

The three boys make a deadly discovery at the army training ground on the moor. Self-destructive Max loses control. Suddenly he's running for his life, pursued by highly trained soldiers - and Levi is missing. Only Alex's skills can save them now.

Colorless Tsukuru Tazaki and His Years of Pilgrimage
Rating: 10.0

Commotion in the Ocean
Rating: 10.0

I enjoyed reading Bullet Boys, it took me a few chapters to get into the book, but towards the end with all the drama and excitement I found it hard to put down. Set on and around the bleakly beautiful Dartmoor, Bullet Boys by Alley Keenen focuses on the relationship between three boys on the cusp of manhoodâ¦Alex, the quiet and intense son of a gamekeeper, only truly comfortable traipsing the heath with a gun in his hand, preferring his own company or that of his dog; Levi, a friendly flirt and social fixer; and Max, my least favourite character, very arrogant, and self-centred and recently expelled from his public school, and at war with his domineering parents.

Alex is the moral centre of the story, and I think some of the book's best momentâ ™s concern his relationship with his father, who has never quite got over the loss of Alex's mother, who died when he was six, and the developing relationship Alex has with Sasha a young single mother. A book filled with action still has time to squeeze in a budding romance! Good to see something has been thrown in there for the female audience.

I did find that the book seemed to jump from one boy to another without notice and I became confused as to who I was reading about until names where mentionedâ¦sometimes I had to re-read a few paragraphs for the plot to make sense. Plus I lost count of the spelling mistakes, whoever edited the book didn't do a very good job; a lot of the words missed out a letter!

In my opinion the plot of the story was very fictional and far from the truth, I couldn't imagine the plot happening in real life, it seemed very far fetched, even for 3 teenage boys the mischief and havoc they get up to I find hard to believe, and the crazy soldiers with a grudge out to get them. I guess if you are a teenage boy or into guns, war, fighting, stalking, shooting etc. it would make a great read, but itâ ™s just not a book for me. The font and size of the lettering used within the book made it very easy to see and read.

The front cover is eye catching, and I like that the three boys are pictured on the front cover, Alex looks like he is described within the book and same with Levi but I somehow imagined Max to be very different, and that was after seeing him on the front cover? I imagined him taller or something! The book ended by allowing the reader to let their imagination decide what would happen to the characters and where they might take their lives. I guess the closest way to getting a happy ever after the author could muster up.

Score: 8.0
Product reviews for listing 7405: The Journey: How I Cheated Death And Cured My Diabetes In 21 Days -  Written by Ernest Quansah

Ernest Quansah almost lost his life to Type 2 diabetes. When he was diagnosed, the sugar buildup in his body had begun to seep from his tongue and the corners of his eyes as a sticky substance. Ernest's diabetes was managed medically with pharmaceutical drugs for two years, according to standard procedure. But after hearing from his doctor that Type 2 diabetes was curable, Ernest threw himself into researching the cause of the condition ... more...