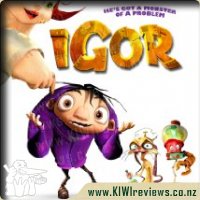 This animated comedy takes place in the gloomy Kingdom of Malaria, where the hunchback Igor (voice of John Cusack) toils away in a lab. Others there include a brain (voice of Sean Hayes) in a jar and a rabbit (voice of Steve Buscemi).

Igor decides to enter a competition to create an evil invention and puts together a Frankenstein-like female monster named Eva (voice of Molly Shannon). But Eva turns out to be sweet-natured, and Igor starts to fall for her. Other voices heard in the movie include Jay Leno, John Cleese, Jennifer Coolidge and Eddie Izzard.

Everyone knows who Frankenstein is, but what little do we know is that Igor isn't as stupid as we think he is, nor is he the only one. Enter Malaria where there are many scientists, each with their own Igor who is there simply to help. Our Igor, however, has higher goals and decides to enter the yearly competition. He makes what he thinks will be a great monster, Eva, but she turns out to be a sweetheart and Igor begins to fall for her.

While this movie is aimed at families, I wouldn't let my eldest (who is five) watch this as I found the basic overall aim of the story a bit hard to catch and so I think it would just go over my children's head, thus making it a pretty pointless movie.

I like the take on Igor and the world created for him to live in. There was a bit of a twist near the end that I wasn't expecting. This is a nice film and I think it had a really great idea, but in the end it's a bit of a miss and nothing special when it could have been a really great movie.

A Huge Adventure for the Whole Family.

After his grandfather disappears, a young boy sets out to save his family home from emerging real estate developers. Arthur learns that he must follow his grandfather's ancient clues to a vast treasure - and unlock the passageway to a spectacular new world filled with mysterious ... more...