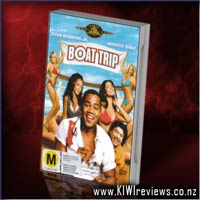 The first thing Nick and Jerry want to do when they get on this boat is get off.

Jerry and Nick are two best buddies whose love lives have hit rock bottom, Jerry's especially, having just vomited all over his fiance on a hot air balloon trip prior to proposing to her.

To escape their troubles and find women, they book a trip on board a cruise-liner, unaware the travel agent has just played a horrid trick on them in retaliation for Nick offending his secret gay lover.

And that's the trick - it's a gay cruise-liner for gay men to make out. And the dim-witted duo begin to realise this, when it's too late to escape. But it could be the best thing to happen to either of them...

I thought this had the potential to be quite lame really, and so despite a certain other reviewer raving about it I approached it with more than a little trepidation. I have to say, in a lot of ways it was a little bit special. And not only do I mean special in a good way, but in a look-the-other-way-it's-dribbling way. I liked it well enough... I wouldn't buy it, but then I am a bit fussy like that.
Cuba Gooding Jr definitely has comedic timing, and overall I did spend a large proportion of the time laughing... but despite the silliness of some of the humour my highly intelligent partner found it more amusing than I did. Maybe I am missing something?

Perfect as a rainy-day or sick-day movie.

Oh I could SO see this happening... there are good reasons why leaping at the throat of a stranger who offends you might not be a good idea... and this sure highlights one possible outcome.

Starring a few famous faces, and one in particular who SHOCKED me with just how convincing he was in his role as a gay gentleman... shocking, but funny as all hell.

This movie actually reminded me a lot of Soul Plane, in the style of unexpected humour... stuff I wouldn't have thought would tickle my funnybone, but did despite my initial scepticism. With some moments that had me rolling on the floor laughing so hard my ribs hurt, this movie was a great way to blow away an hour and a half, and the storyline showed that you don't know what you've got, until it's gone... and that sometimes to find what you need, you have to go where you would normally never tread.

Overall, a fun movie, worth watching at least once, if for no other reason than to see if you can look at the world from the other side of the coin, and see what strikes you as funny. You never know, you might just find it opens your eyes to another point of view.

Take a trip down the aisle you'll never forget

Academy Award winner Meryl Streep leads the cast of 'Mamma Mia!', the screen version of the worldwide stage musical phenomenon featuring the songs of ABBA. Streep stars as Donna, the mother to Sophie, who's on a quest to discover the identity of her father on the eve of ... more...