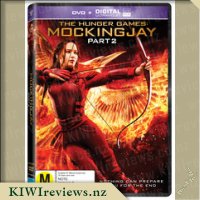 The Hunger Games: Mockingjay - Part 2 now brings the franchise to its powerful fourth chapter in which Katniss Everdeen (Jennifer Lawrence) now fully realizes the stakes are no longer just for survival - they are for the future.

With the nation of Panem in a full scale war, Katniss confronts President Snow (Donald Sutherland) in the final showdown. Teamed with a group of her closest friends - including Gale (Liam Hemsworth), Finnick (Sam Claflin), and Peeta (Josh Hutcherson) - Katniss goes off on a mission with the unit from District 13 as they risk their lives to stage an assassination attempt on President Snow who has become increasingly obsessed with destroying her. The mortal traps, enemies, and moral choices that await Katniss will challenge her more than any arena she faced in The Hunger Games. Finally the long awaited conclusion to the epic Hunger Games saga, and it certainly does not disappoint. having not read the books I can't compare the differences, but to be honest only the real die hard fans will actually complain. As is now becoming the norm for these multi book to film saga's this is of course the 2nd part of the final book in the trilogy, so we of course begin directly after the events of part 1. This film has a darker tone to it than the first three, and that is saying something, as the whole saga revolves around a televised blood sport, which lends it to a dark tone to begin with. I love the characters and they way they have evolved over the span of the four films, characters whom you wanted to hate in the beginning, you now want them to survive and live happily ever after.

Also running deep in this film is the continuing morality tale thread, where good people, do bad things, for the right reason, or so they believe. This thread also lends itself to one or two wonderful plot twists, which may surprise some, unless you have already read the books.

A film can soar or bomb on it's story, and even to a degree it's visuals, but to me the most important thing is casting. Without the right casting a film is nothing, and the casting as been supurb. We of course have the stars Jennifer Lawrence and Josh Hutcherson, but to me it's the entire ensemble that makes it work, from Woody Harrelson (a far cry from his Cheers days), to Julianne Moore, the wonderfully engimatic Donald Sutherland, and of course Stanley Tucci...

But we also cannot go without mentioning the wonderful, and last shown performance of the brilliant Philip Seymour Hoffman as Plutarch Heavensbee - The Games Master. Once again he showed us how great a performer he truly was, and like many of the other greats taken before his time he will be sorely missed.

Buster Moon is a dapper Koala who presides over a once-grand theatre that has fallen on hard times. He is an eternal optimist... okay, maybe a bit of a scoundrel, who loves his theatre above all and will do anything to preserve it. Now facing the crumbling of his life's ambition, he has one final chance to restore his fading jewel to its former glory by producing the world's greatest singing competition.