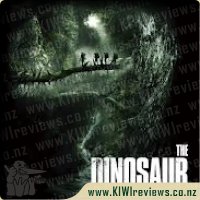 Brace yourself for a chilling ride into the heart of the Congo jungle, as an expedition accompanied by a film crew, sets off to track down the mysterious Mokele Mbembe, a mythical creature akin to the Loch Ness Monster. They soon find themselves in a terrifying fight for survival as creatures thought to have been extinct for 65 million years are found to be very much alive.

My husband saw the trailer for this at the start of another movie that we had hired, I hadn't been paying attention but he was keen so we rented it out once it came on the shelves at our local video store.

News footage from the Congo show a creature that is believed to be Africa's answer to the Loch Ness Monster. A camera crew and a small group of people from the British Cryptozoological Society (as well as the leaders stow-away fifteen year old) head out in search of proving or disproving the existence of such a creature. Whilst in the helicopter they crash into some strange birds, crash land on the island and are forced out on foot. This movie takes a bit of Jurassic Park and hand-held camera lost footage and combines the two.

The creatures that are seen in this movie, look suitable creepy or cute, the only issue with them is they look like plastic toys brought to life, but other than that they are done really well for what is a low budget film. As for the hand-held camera aspect of it, it can get a little drawn out at times, but this only occasionally detracts from the overall experience of the movie.

For what it is, I think this is as good a movie as most of the blockbuster lost footage movies that have been on offer over the past few years. And whilst, naturally, there are some pretty big holes in the plot line, you can find that in half the multi million dollar films anyway. If you like the hand-held camera filming style, then don't give this flick the flick.

A semi-sequel to Disney's 1940 classic Fantasia which features the original film's most famous sequence - the Mickey Mouse adventure 'The Sorcerer's Apprentice' - plus seven other all-new animated interpretations of classical music.

Highlights include the interwoven stories of a group of 1930s New Yorkers accompanied by Gershwin's 'Rhapsody in Blue', the volcanic eruptions which illustrate ... more...