Beyond The City Limits review

ProdID: 2058 - Underworld: Rise of the Lycans
Directed by Patrick Tatopoulos 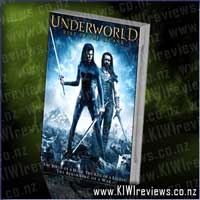 This, the prequel story, traces the origins of the centuries-old blood feud between the aristocratic vampires and their onetime slaves, the Lycans.

In the Dark Ages, a young Lycan named Lucian emerges as a powerful leader who rallies the werewolves to rise up against Viktor, the cruel vampire king who has enslaved them.

Lucian is joined by his secret lover, Viktor's daughter Sonja, in his battle against the Vampire army and his struggle for Lycan freedom.

I really enjoyed the first Underworld film with Kate Beckinsale and her absence from this prequel made me disinclined to see it at the Cinema. When I eventually got around to watching it, I found it to be fairly much what I had expected - a respectable filler as far as back story goes, but very limited in colour, locations and acting ability. Although the first Underworld was dark, it was nowhere near as bleak as this. Reminds me of a quote from Stargate perhaps - "they didn't call them the dark ages because it was dark..." but hey, with nocturnal vampires, what can you do?

For me, neither the romance nor the tragedy were all that convincing in this film, perhaps because it was so preoccupied with getting around to the next blood spurting battle scene. Then again, if you like that sort of thing, this is probably the film for you.

This is a 'useful' story to flesh out the background to the war between the lycans and the vampires. We get a full understanding of how it all began. We also get an insight into the earlier days of characters that are still of interest later in the Underworld timeline. In particular, Victor, Lucian and Andreas Tanis. If you are a fan of this 'world' then Rise of the Lycans is definitely worth a view.

As for the cinematics....it is a dark movie in every respect of the word. Not quite black & white, but seemingly colourless, bleak, dingy and well...dark. We get to see the worst state of everyone involved and lots of blood. Lots of fight scenes with excessive, copious volumes of blood...there's the spurting blood when a body is ripped open with warewolf fangs, the subtly different (or was it entirely the same) spurting blood when a body is sliced apart with a sword, there's the forward splash of blood along the rocky wall left to right and then later the splash of blood along the rocky wall right to left (that looked suspiciously like a flipped replay of the first one)....suffice it to say there was a significant portion of footage dedicated to extended scenes of graphic bloody fighting. The death of Sonja is suitably shocking to fuel an enduring fury in Lucian.

Overall, I have to say this has the feel of a somewhat lower budget production compared to current expectations of SciFi or Fantasy movies. However, the content provides a good foundation for the greater story and is consistent with the storyline in the other two movies, Underworld and Underworld Evolution.

This movie had already been set up by the first one. The challenge for them here was to put all the elements together and tell the story in-depth.
I believe they achieved that very well. The story was well thought out and the effects were a step up from the last two. The actors (many returning from the previous movies) are totally in character and you can see how things progressed into the other two. I would definately recommend this to Underworld fans.

An army of malevolent little monsters take over a high-tech corporate skyscraper when a cute and intelligent exotic pet is exposed to water. The "Mogwai's" owner joins forces with the Trump-like head of the corporation to regain control.