I Am Jellyfish review 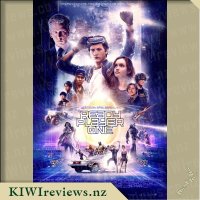 Disclosure StatementFULL DISCLOSURE: A number of units of this product have, at some time, been supplied to KIWIreviews by the company for the purposes of unbiased, independent reviews. No fee was accepted by KIWIreviews or the reviewers themselves - these are genuine, unpaid consumer reviews.
Available:
in cinemas 29 March 2018

In the year 2045, people can escape their harsh reality in the OASIS, an immersive virtual world where you can go anywhere, do anything, be anyone-the only limits are your own imagination. OASIS creator James Halliday left his immense fortune and control of the Oasis to the winner of a contest designed to find a worthy heir. When unlikely hero Wade Watts conquers the first challenge of the reality-bending treasure hunt, he and his friends-known as the High Five-are hurled into a fantastical universe of discovery and danger to save the OASIS and their world.

I'm really struggling to figure out a way to properly start this review without using a string of expletives; I was that caught off-guard by the film. Watching both of the trailers, I had a mild curiosity due to the number of gaming and movie characters present, but otherwise, I felt rather apathetic towards the film. This is a film directed by Steven Spielberg, however, so I decided to give it a chance, and I am incredibly thankful that I did. By far, the best film to come out in 2018 so far. I'm hesitant to talk freely about the film because a) spoilers, and b) I don't want to overhype the film, as my low expectations potentially could have contributed to my high appraisal of the film.

The premise of the film is simple, the future is a world where real-world experiences have little value, instead everybody lives their lives online through an avatar, which can be in any form that they wish. These avatars can do whatever they wish, whether it be performing, fighting, relaxing, dating, clubbing, the sky is the limit. This is highly relatable as many generations in our current age use movies and games to escape reality and live vicariously through other characters. To see a world portrayed on screen where the only real precious commodity is an internet connection, is a jarring dystopia that is too close for comfort.

Ready Player One follows the protagonist Wade Watts a.k.a. Parzival as he attempts to decipher a code and unlock items that will grant him immeasurable wealth and control of the online world. The world brimming with avatars, characters, and items from popular franchises, is full of pop culture references from as far back as the 1960's to now. The movie is a treasure trove of characters (e.g. Joker and Harley Quinn, Duke Nukem, Freddy Krueger), vehicles (e.g. A-Team van, Bigfoot monster truck, the Adam West batmobile, the Back to the Future DeLorean), and weapons (e.g. Halo Assault Rifles, Gears of War Lancer), and the trailer alone has had people pausing and searching frame by frame to discover as many easter eggs as they can. The magnitude of what is involved and the hoops that must have been jumped through to be able to use all of these intellectual properties is immense and incredibly impressive (or is it perhaps a large globally dominant corporate giving themselves a large pat on the back). This is a film best enjoyed on a large screen.

Contemplating how the plot of the film manages to be so engaging, it likely comes down to the source material. The film is based on the 2011 science fiction novel of the same name, written by Ernest Cline. This always helps create more involving and authentic characters in the films, as the actors and actresses have a greater breadth of the character than what is portrayed in the film, thanks to the original material. We also know that the film will remain faithful to the main premises, as the writers for the film are Zak Penn and none other than Ernest Cline himself. Other factors come from the game-like nature of the virtual world, with in-world money, upgrades, character customization, races and fights, there is a level of competitiveness that gets thrust upon the viewer drawing them in.

The cast were well picked, with Tye Sheridan's portrayal of Wade Watts being brilliantly awkward, and Olivia Cooke's Art3mis character delightfully charming and foxy. The remainder of the cast can come across overzealous and at times lack depth of character, but their presence in the film is to fill out the team or providing an antagonist to push back, and in this case, playing on the idea of not knowing who is behind the keyboard is a theme that allows for a diverse cast, even though it it is unnecessary to the plot. It is great to see that while appearances may not match, personalities transcend the two worlds.

Graphically speaking, thanks to the style of the avatars it is easy to differentiate between the in-game and real-world scenes, but unlike actual video game movies like Assassin's Creed (which spent far too much time in present-time and not enough in the past "assassin" timeline), Ready Player One has actually struck a perfect balance between virtual and real, showing real-world consequences without getting bogged down in the specifics, allowing the pace of the film to steadily increase.

The overall plot of the film is incredibly basic, but is still incredibly entertaining, and will likely have gamers and movie buffs alike enthralled. Finally, a film not spoiled by the trailers, that delivers a pretty close to family-friendly performance. A safe bet for a good time.

"It was great when it all began..." Celebrate 25 years of midnight movie madness!