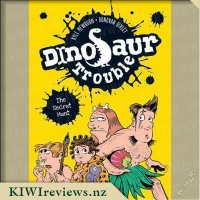 Sometimes a big brain means big trouble. Step back in time to meet clever stone age boy Arg and his stone age family. It's where the trouble begins!

Arg and Shlok are playing hide and seek, but eww, squish, squelch! They get into a sticky mess when they stumble on a secret hunting party and a mystery game. This is not for the faint-hearted - grossness abounds!

The fourth book in a new series from award-winning author and illustrator team Kyle Mewburn and Donovan Bixley.

Why the Toast Always Lands Butter Side Down. The Science of Murphy's Law
Rating: 8.0

My 9 year old son has just started reading chapter books so am always on the look out for ones that may be of interest to him. I have seen these Dinosaur series of books but haven't had the change to read them but when I saw this one available I jumped at the chance to review it. The first thing that jumps out at me is the bright yellow cover and the boy with boogies hanging out his nose instant boy attraction haha. I loved that the pages are not completely covered in words and that the book contains a lot of entertaining pictures.

This book is number 4 in the series and contains 8 chapters and 64 pages, I think this is perfect length as my son gets bored pretty quickly when the books get too long. The one is based on Arg and his best friend Shlok secretly following the villages hunting group to find out where they are going when there's no need to hunt.

I love Scholastic books and get the lucky book club catalogue from the school regularly and will be looking out for these books for my son. The price of $9.99 is quite steep but you can get better deals with the Lucky book club. A definite read for all ages and genders I'm sure my daughter will be sneaking off with this book also. 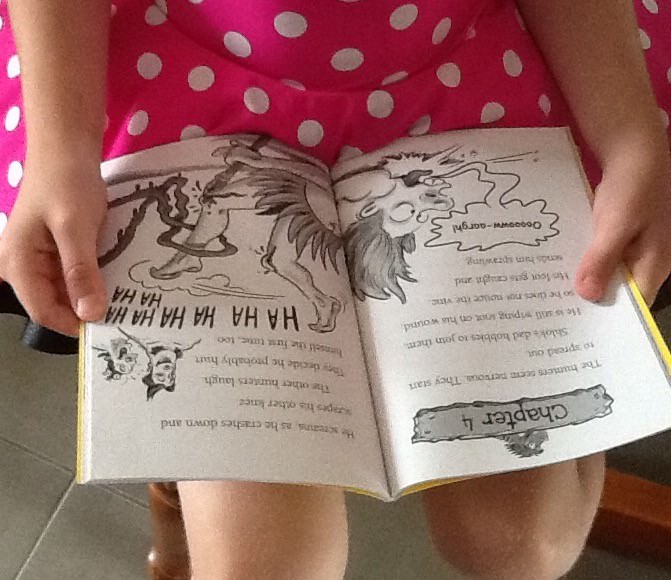 Miss Five was quite unable to calm down when she discovered that she was going to review another book in the Dinosaur Trouble series. She already has the second and third books in the series and is a firm fan. Those two books have been read. reread, coloured in, and taken on many a trip in the car in case there is some down time. Now it appeared that a third book was about to join them. She just could not wait - we had to sit down immediately and read it from cover to cover. Being almost six, she is able to read with confidence now, so she got to read to me rather than the other way round.

Just as they have done in the other books in the series, the authors appeal to children's fascination for all things gross. High on the list for this book is the art of picking your nose, and what you do when you find something hidden up there. I guess all adults went through this stage once, and would prefer to forget it, but Miss Five has no such hang-ups. She completely accepted that the hero, Arg, would have such a grubby friend as Shlok!

We had great fun attempting to pronounce ""Grogllgrox", the name of an evil tribe that Arg has been warned to stay well away from. Miss Five suggested it might be something like "Giggly Rocks" so that is how we referred to them. It seems that is as good a way as any to pronounce it. We were also interested to discover that velociraptors are just as ticklish as five-year-old humans.

Mewburn and Bixley have discovered the perfect balance between narrative and graphics so that they flow seamlessly. This is a great way to engage young readers as they like to be offered pictorial evidence of what the words are telling them. The graphics often provide a key to deciphering new words in the right context, stimulating a youngster to fill in the gaps without outside assistance. This was the case with Miss Five when she found the description of a velociraptor. She had met this word before, but only when someone else was reading to her. This time she had to figure it out for herself and that is where the graphic came in. And good graphics stimulate children to choose a book in the first instance.

There were plenty of laughs throughout the story, and when the secret of the title was finally revealed, we were suitably surprised. It would spoil the ending to refer to it in this review, however, so you will have to get the book and read it for yourself. Not that reading the whole book is a chore - it is utterly delightful.