« Tinker Bell and the Secret of the Wings review 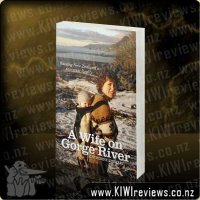 Disclosure StatementFULL DISCLOSURE: A number of units of this product have, at some time, been supplied to KIWIreviews by the company for the purposes of unbiased, independent reviews. No fee was accepted by KIWIreviews or the reviewers themselves - these are genuine, unpaid consumer reviews.
Available:
September 2012

Ever dreamt of escaping your busy life and going bush? Here is the story of someone who actually did it.

In 2010, New Zealand met its remotest family, through the writing of Robert Long - aka Beansprout - in A Life on Gorge River, and we were intrigued. Now Beansprout's wife, Catherine Stewart, tells her story, and answers many of our questions. Why did she decide to join him on the wild West Coast, two days' walk from the nearest road? Why and how did they raise their family there? Was it terrifying to be so far from medical help? How did she home-school the children? How have they all fared now the kids are young adults, forging their own way in the world? And what lessons are there for the rest of us from her experiences raising her family in such splendid isolation? With dry humour and fascinating insights, Catherine paints a vivid picture of her life at Gorge River and beyond, and a unique take on raising a family.

Catherine Stewart, a sailor and adventurer with a Masters degree, joined Beansprout at Gorge River in 1991. Together they've raised their two children Christan and Robin in this beautiful spot.

Having listened to Robert Long speak about his memoir "A Life on Gorge River" I was looking forward to reading the story of Catherine Stewart, his wife and mother of their two children, Christian and Robin.

I had expected to hear their story through Catherine's experience and to get an understanding of what it was like raising two children in such isolation from a women's perspective but also about how she met and fell in love with Robert "Beansprout" Long and what motivated her to leave the life she had for a life on Gorge River.

Firstly I must say I struggled to read this book. Had I not been reading it with the purpose of reviewing it I would probably have given up after the first chapter. As it was I had to continually make myself sit down and read this chapter by chapter. I am wondering if this book was written in the expectation that Robert's book had been read first and that may have made the reading of this book easier.

The book begins with a long narrative of Catherine's family history and of her life prior to meeting Robert. This was about 80 pages of the books 300 plus. Whilst the information about her life was definitely relevant, as it gave a picture of the type of person Catherine was/is and that fed in to understanding why she might have chosen to leave a very promising career in the medical field behind, the narrative was written in such a way that it didn't capture me or give me a real sense of who she was.

When she met Robert there was very little detail (well none actually) as to their relationship forming and how she made the decision to permanently move to Gorge River, aside from her pregnancy of Christian. I was really disappointed in the lack of narrative on her relationship with Robert and although from a personal perspective this was about her life, not "their life", I had no sense of her and Robert as a couple together. The story was written in such a matter of fact way with such a jumble of factual events and occurrences, often including many other people, that the writing didn't feel as emotive as it needed to, to capture my interest.

From the event of Christians birth the story focuses solely on Catherine's life at Gorge River but she has written the book in such a haphazard way jumping from event to event and often mentioning several events in one paragraph that have no relation to each other. This would leave me confused and trying to figure out what I had missed. Often significant events are just touched on in a sentence then passed over.

I really struggled with the way the book was written as it wasn't easy to read or to follow. I felt like Catherine had so many events that she wanted to mention that she simply wrote them down as they came to mind without structuring them or linking them in a way that would have helped the story to flow. The lack of flow and exploration of events really lets this book down. I really wasn't captured by Catherine's story and the book was not emotive enough to hold my attention. Because the book wasn't written in chronological order I found it difficult to become absorbed at all.

I did love the photos that Catherine shares in the book of her family and these are such an invaluable visual history of their time at Gorge River.

Whilst I did glean a sense of what life must have been like for Catherine and the huge difficulties with which the family faced in their isolation many of my questions went unanswered and my knowledge was gleaned with great perseverance.

This is a book which will certainly leave you in awe of Catherine's ability to raise her family in such remoteness but it is not an easy read to get there.

Score: 9.8
Product reviews for listing 1215: The Voyage of the Sable Keech -  Written by Neal Asher

Sable Keech was a walking dead man, the only one to have been successfully resurrected by nanochanger. Did he succeed because he was infected by the Spatterjay virus, or because he came late to resurrection in a tank of sterilised seawater? Tracing the man's last-known journey, Taylor Bloc wants to know the truth. He also wants so much else - adulation, power, control - and will go to any lengths to get them.