ProdID: 1601 - Into a Dark Realm
Written by Raymond E. Feist 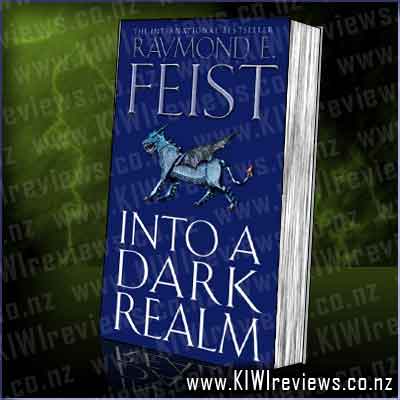 Into a Dark Realm product reviews

Chaos threatens to overwhelm two worlds as the most dangerous force ever encountered threatens to invade Midkemia, while the most treacherous magician in history - the madman Leso Varen - begins to wreak havoc on the world of Kelewan.

Pug and the Conclave of Shadows are determined to find Varen, only to discover that he has usurped the body of one of the most powerful men in the Empire of Tsuranuanni, a Black Robe and member of the Assembly of Magicians. Pug has the almost impossible task of uncovering the true identity of the fiendish magician in an entire city full of Black Robes.

Murder, mayhem, horror, and the darkest evil await Pug's son, Magnus, and his companions as they attempt to discover the ultimate source of the terrible threat that looms over Midkemia and Kelewan. Leading a desperate expedition into the realm of the Dasati, the vast and malevolent empire which is threatening his homeworld, Magnus hopes to find the key to defeating this enemy who is capable of overwhelming the combined might of two worlds. But even if he does, the companions will have a desperate struggle to return home with their vital information.

Three worlds will teeter on the brink of destruction as the third Riftwar: the Darkwar, is unleashed.

100 Most Awesome Things on the Planet: Prepare to be Amazed!
Rating: 9.5

Rascal and the Cheese
Rating: 9.1

Right time to say what I think :)
Having read all of Raymond E Feist's books to date I am a fan, and the conclave of shadows series just confirms this for me.
This book - which is number five in this series - continues the fight of Pug, Marinda, Nakor, Magnus, Caleb and Thomas against the forces of chaos.
If this is the first book you've picked up to read, a fair amount will not make sense even with some backtracking within the story, so I would suggest going back at least one book (Flight of the Nighthawks) but to get the whole story start at 'Talon of the Silverhawk'.
Fiest's world of Midkemia is a vast one and has formed a living history of it's own through his books, and he draws upon this history to bring the current book to life. Reading it you can almost believe that all of it has, could, and will happen, and it is this experience that for me makes these books so enjoyable.
I couldn't wait for this book to come out and couldn't put it down once I started and waited (impatiently) for the next one.
All in all a thoroughly good read and one I will always be happy to read again and recommend to someone who like fantasy books.

It has been a few years since I last lost myself in a Raymond E. Feist book, and I had forgotten just how much I enjoyed his tales. The first few pages captured my attention firmly enough that I found it frustrating that I was only able to read it a snippet at a time, work etc allowing me only a page or two here and there. ~sigh~ That has got to be one of THE most annoying things when you're reading a really good book!!
Feist easily slides between the four different sections of the story, without leaving you lost and floundering as to just which world or characters you're with this time. There's Jommy, Tad, and Zane's 'education', aided by both monks and the Military; there's Valko's rise to power and his learning of the truth and the White; Pug, Magnus, Nakor, and Bek's journey to another realm; and lastly, Pug's wife, Miranda, left at home to twiddle her thumbs while trying not to worry about her husband and son as they go about a task that could end up killing them - although things don't exactly stay quiet and boring for Miranda either.
Having not read all the previous books in the series, there were a lot of pieces of information missing, which did take a small fraction of the enjoyment factor out of it. But this has simply made me more determined to go out and collect the rest of the series that I haven't got, to make sure I get the full story. There is most definitely more to come though, as the one thing that did annoy me slightly, was that despite all the building up to something big that Feist did along the way, I reached the end feeling like I'd really only read a chapter in the main story there wasn't even a big event that was finished up by the end. So many loose ends waiting to be tied up!!!
I will also admit that I find Feist quite different to a LOT of other fantasy authors. Whereas most of the fantasy books that I really enjoy leave me with a 'wow' kind of feeling at the end, after they've slammed me through the book in a huge rush of adrenaline, wind up, and big finale. Feist's Riftwar series is a far more gentle and 'subtle' ride through the book, the buildup being a lot slower, yet still just as enjoyable.
Once again, Raymond E. Feist lives up to expectation - just don't expect to have the satisfaction of at least one event being completed, or you'll come across disappointment and be wondering where the rest of the book is!!

Millions of Harry Potter fans fly out of their seats for Quidditch, a magical game from J.K. Rowling's wonderful world of witchcraft and wizardry.

With the Harry Potter Golden Snitch Sticker Kit, you can celebrate the popular wizarding world game of Quidditch by displaying the Golden Snitch on the included stand, and let your imagination take flight with the enclosed book of eight stickers.