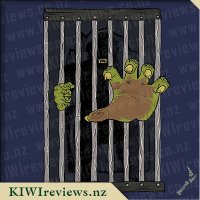 According to the Department of Troll Conservation, Cave Trolls are very rare and on the highly endangered list..... but, you also could become endangered when you go on Troll Patrol!

After accidentally destroying the Troll's lair, a world's first underground eco-sanctuary for the preservation of Cave Trolls was built in the heart of Waitomo. But that doesn't mean that "Tom" wants to be looked after.... in fact he can be a bit "antisocial"

This fun activity relies on participants using their stealth, cunning and survival instincts to navigate Tom's underground lair and complete their mission.

Festival of the Lights
Rating: 10.0

Driving towards our accommodation for the night, we passed a signpost for the Adventure Park and Cafe -which had a picture of a Troll on the roadside signpost - 'random' we all thought. The next morning we came with the intention of breakfast. Driving along the Cafe's private road we saw a sign for the Troll Cave, again my girls asked what it was and neither of us had heard of it and there was no explanation anywhere. We walked in the door and was greeted with a lovely smile and asked 'were we here for the Troll Cave' I shook my head and said 'sorry just breakfast'.

While we were eating I was looking around and could see no mention of what the Troll Cave was. Finishing my fantastic meal, I finally went looking for answers. I was told it is a great family activity and currently, they are running a promotion where kids are free. I was informed that it goes for about 90 minutes and you enter different caves and pass riddles before entering the next stage and there is a Troll to watch out for. As we were wanting to do cave activities we thought why not. It's cheaper than pretty much anything in Waitomo and could be worth a giggle. We filled out the waiver which included your knowledge of Trolls - the Hobbit kind, the colourful hair kind, a horror movie kind or basically no knowledge. How much of a scaredy-cat you are - never scared, always scared or somewhere in between, and what do you want to happen to your kids - scare them senseless where they will need counselling, to "only say boo".... extremely entertaining start.

We drove to the cave, as was pouring with rain and there were messages on the signposts about be aware of the Troll. Pulling up we were ushered into a room where our picture was taken - just in case we did not live and needed photo evidence. Then the fun began. We were asked "are you sure you want to continue?" as being lead into another room and doors were locked. We waited for about 25 minutes so our eyes could adjust to the dim lighting. During this time we were read a very entertaining and insightful story about how Tom the Troll ended up in Waitomo and then set our challenge. Toms tracker was defective and we need to replace it by finding him in one of the rooms. We were given instructions on what to do and then told Soap drives Tom crazy so had to use this disgusting smelling slime to disguise our smell.

We were then ushered into an elevator and taken ten flights down - each armed with only a torch to aid us. Working as a family you need to pass riddles in order to get into the next room. As they are quite trickly there are 3 containers located next to the riddle where you stick your hand in and pull out potential clues. Now for a 7 and 10-year old that was terrifying especially since some of them move and grab your hands. A lot of laughter and screams were had. When you know the answer you scream it out together nice and loud and if it is correct you are given entrance into the next room.

You walk thru a waterfall (and get very wet), you go on a pull-along raft, you walk on paths and stepping stones and in my case, you laugh non stop. Extremely fun and entertaining. It is let down by lack of decoration in some rooms and at times just feels like a cell. But for the young ones it's incredible. We found Tom and changed the trackers and were impressed when the walls started closing in. After celebrating passing we are brought into the most incredible room and one I could have stayed in for hours! Tom's pets - a room full of eels and one of the only man-made structures holding glow worms. It was stunning. Watching the eels swim in tubes and play in rocks, you are also encouraged to pat them. I loved it! One thing I really appreciated afterwards was being asked if we suffered from weird dreams and explained that on occasions Tom has been known to jump into peoples' dreams. We were told if Tom did that all you need to do is go into the bathroom and wash your hands and your face with soap and he will go away - fantastic tip especially for Miss 7, thankfully Tom has not visited.

After finishing you are told to go back to the cafe where adults are given complimentary drinks and kids get the book to take home for free, which usually retails for $15. You are each given a chocolate with the warning one of them contains a slug's slime and could kill you - hubby chose and still alive today. The girls also were awarded certificates of bravery which they were very proud to show off at school as well as the books.

Waitomo is not the cheapest place to visit and when you consider the time we spent, books, drinks, photos and chocolate this is beyond great value. We had the best time and I have not laughed so much in a long time. It only cost $78 for the four of us and we were talking about it for ages. It could do with some added features but that's more of a personal feeling. Also, the adventure park and cafe need better signs/information so everyone aware of such a neat place. Definitely the best family activity - highly recommend.

This is our most popular half day trip and is the perfect daytime activity for the whole family. The trip starts from The Boatshed and takes you across Lake Karapiro to a hidden inlet. The inlet offers access to two waterfalls which are only accessible via kayak.

The first waterfall takes you up a narrow section of canyon which is ... more...