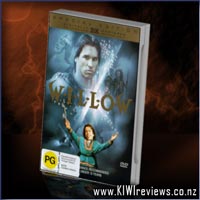 In the dungeons of the castle of the evil Queen-sorceress Bavmorda, a prisoner gives birth to a child who, according to an ancient prophecy, will put an end to the reign of the Queen. A midwife saves the child from the wrath of Bavmorda, but is forced to throw her cradle in a river when reached by the Hounds of the Queen.

The river brings the child near a village of dwarves, and the little Willow adopts her. When the Hounds reach the village, Willow begins a difficult journey to bring the baby back to her people to fulfil the prophecy.

Willow is a movie that I grew up watching (it's the same age as me) and it has never lost its charm for me.

Willow, played by the wonderful Warwick Davis, is wanting to become the wizards next apprentice when baby Elora (who is prophasized to bring an end to Bavmorda's evil reign) and Willow is sent on a quest to return the baby to the world of humans. Along the way he meets a witch who tries to teach him magic and Madmartigan (Val Kilmer) who can't decide if he wants to help or continue in his criminal ways. The actors are all doing a great job in their role.

The scenery is wonderful, they filmed in a few different locations, Wales and New Zealand (something which at the time always filled me with a sense of pride), with Bavmorda's castle set in our very own Tongariro National Park. The special effects in this are rather good, though they do account for a couple of scenes that are rather creepy (and I still find them so 27 years later), and so I think it may be another year or two before I let the kids watch it, but this is such a fun story that I will be watching it with them for sure.

A journey, a hero (or two), an evil witch and a happy ending. All classic elements of a movie which, I agree with the last reviewer, started this small country on its way to cinematic stardom. Some of the scenery, if you look particularly carefully, you can tell it is New Zealand. That aside, it is a fast-paced romp with great visuals and a brilliant cast.

Another notable aspect of the movie, if anyone is interested, it is the movie Val Kilmer met, and fell in love, with Joanne Whalley.

This is a classic movie filmed in NZ full of fun and fantasy in every shape and size you can imagine. Magic and swords, love and romance, fire and boiling oil, dragons and brownies. There is something for every aged and type of viewer. great to see some famous faces again, this movie really captured me years ago when it first came out and though it's special effects are a bit jaded and obvious around the edges, there is still magic in the movie that will keep it young forever. As one of the first big-stream fantasy movies to be filmed down here, this movie could very well be considered one of the foundations of NZ's wonderful high-profile movie industry. Whether you have kids or not, you would not be wasting your money buying this one, its a treat for the whole family.

Vivica A. Fox makes her Bring It On debut as Cheer Goddess, the internet's most popular "Cheer-lebrity."

When Destiny (Cristine Prosperi), captain of three-time national champions "The Rebels," is challenged to a global cheer showdown by an edgy new team called "The Truth," Cheer Goddess organizes a virtual battle for squads from all around the world.

It seems like the whole world wants to take down Destiny and her team, and they just might succeed, unless Destiny can rise to the challenge, set her ego aside and figure out who her real friends are.