« New York, I Love You review 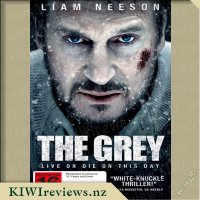 A jaw-dropping thriller starring Liam Neeson as an unlikely hero forced to lead a group of men, in their fight to survive, when their plane crashes into the remote Alaskan wilderness. They must battle injuries, merciless weather and a vicious pack of wolves - before their time runs out.

"The Grey" isn't the type of movie that I would typically pick to watch out of a line up but my husband was putting a movie on and this is what he decided to put on, given I was in the same room I figured why not and watched it with him. The movie focuses around Neeson's character, with the others more like tag alongs, which works ok for this film, as he tries to survive the frozen wilderness after the plane he is in crashes. Oh, and there's a pack of wolves who have decided to pick them off.

A lot of the tension comes from the men and their attempt to survive both nature and animals and this is done well, I didn't really care if they lived or not and I didn't care about any of the characters but I was watching, interested to see if any of the group would make it out alive or not. The scenery is gorgeous and really rather stunning, I could easily ignore everyone else and just look at the background. The plot isn't anything fabulous but I do like that there isn't a perfect ending, I think that would have made the movie even worse.

I could have happily lived my life without seeing this movie but now that I have I can say that it is decent enough, I'm just in no rush to see it again.