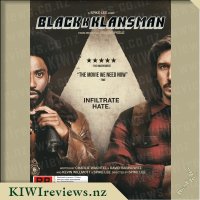 From visionary film maker Spike Lee comes the incredible true story of an American hero. It is the early 1970s, and Ron Stallworth (John David Washington) is the first African-American detective to serve in the Colorado Springs Police Department. Determined to make a name for himself, Stallworth bravely sets out on a dangerous mission: infiltrate and expose the Ku Klux Klan. The young detective soon recruits a more seasoned colleague, Flip Zimmerman (Adam Driver), into the undercover investigation of a lifetime. Together, they team up to take down the extremist hate group as the organisation aims to sanitise its violent rhetoric to appeal to the mainstream.

Every so often, a film comes along that has a powerful agenda - and the challenge for the director is to maintain those fine lines between accuracy and entertainment, action and argument. In this movie, Spike Lee manages to pull this off with panache. After the opening sequence, which presents an emotive speech complemented by archive footage from Gone With The Wind (complete with a medley of background melodies like Dixie and Old Folks At Home) and Birth of a Nation, followed by reference to the events at Little Rock, the film slows a little. I thought it was not going to maintain the initial impetus. However, before long, it picks up momentum and from then until the end of the movie the action is non-stop.

The movie initially comes across as a buddy movie with the occasional comedlc element as the scene is set for the infiltration of the present-day KKK. This would appear to be an absurd idea until you remember that the story is based on fact, and that the protagonist, Ron Stallworth (John David Washington), really did do just this in collaboration with his Jewish colleague Flip Zimmerman (Adam Driver). The two men work closely together to pull off the deception, in the process highlighting some of the seamier sides of American society (as when Stallworth is beaten up by two white cops who refuse to believe that he is working undercover, or when Zimmerman is ordered to prove he is not circumcised by dropping his pants - an action he avoids thanks to the convenient intervention of a fellow cop with a rock!)

As with classical Greek drama, there are constant references to the current political situation so that the audience is never in any doubt as to whether the KKK still has influence among certain sections of society. Implicit in this is the belief by many that they are entitled through the mere accident of having been born white. Donald Trump's statement that there is good on both sides does nothing to further the cause of equal human rights: this is cleverly inserted towards the end of the film to serve as a warning that the struggle is still ongoing, and people should not become complacent in the assumption that racism is a thing of the past.

In terms of performance, there is little to choose between the main characters. There are several very powerful performances, although if I had to name a couple, I would probably single out Topher Grace (as David Duke, presenting a challenging and constantly changing role with conviction), and Ashlie Atkinson (as Connie Kendrickson, the Klan supporter and activist who is as evil a villain as one found in any horror movie). But overall the cast delivers a strong and convincing story. it is a sign of good acting when the audience begins to loathe the "baddies"!

Included on the DVD is the short film A Spike Lee Joint. It features interviews with several of the actors, illustrated by clips from relevant sections of the movie itself. They discuss how Lee links past and present Klan influence and how it is presented through archive footage of real events and recreations of earlier ones. Also included in the "extras" section is an extended trailer comprising a series of stills and brief shots, played out as a slideshow against a soundtrack of Prince's Mary Don't You Weep.

No mention of this movie would be complete without a reference to those amazing hairstyles! The main black characters, both male and female, sport extreme styles which are so extravagant that they are the first thing you notice. This technique marks them instantly as black - reinforcing the message early in the movie about pride in one's own appearance and not striving to conform with the "mainstream" ideas of beauty as dictated by another racial group. This is a vital message too for young people who are struggling to come to terms with their own physical appearance, a message that desirable physical traits cannot be limited to a single "norm".

Elvis by the Presleys is the most revealing and poignant video portrait we will ever see of the artist as husband, father and friend. As never before, Priscilla Presley and Lisa-Marie Presley, along with members of Elvis' family and extended family, freely share their own stories, emotions and intimate memories on camera, and they allow us to enjoy home-movie footage of Elvis never before shared with his fans.