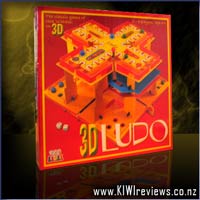 Disclosure StatementFULL DISCLOSURE: A number of units of this product have, at some time, been supplied to KIWIreviews by the company for the purposes of unbiased, independent reviews. No fee was accepted by KIWIreviews or the reviewers themselves - these are genuine, unpaid consumer reviews.
Available:
at local Game retailers

The traditional game of LUDO is a perennial favourite amongst children of all ages. However, in this ingenious and novel new version, the fun of the game is elevated to new levels, courtesy of 3d.

In 3d LUDO, the game plays just as it always has done, although this time with an added twist. if you land on an opponent's playing piece, you win the right to drop that piece down a chute. However, just when it seems to have disappeared for good, it suddenly reappears, as if by magic, right back in it's owner's starting base!

It doesn't matter which colour piece it is that is dropped down a chute, it will only return to it's rightful owner's starting base. It's simple but it's clever, and it never ceases to amaze enquiring young minds. Capturing your opponent in a game of LUDO has never been so much fun.

Race to be the first player to get your pieces home - but don't get caught on the way, because it's a long drop back down to the start!

Okay, so I had to be reminded on how to play Ludo (It had been close to 20 years since I played it last), but once I had been refreshed there was no stopping me, okay there was some stopping me in the fact I couldn't roll a six to save myself, so whilst everyone else was rolling their sixes and getting on with the game I was sorely getting beaten, and consequently I came last most times. However that did not spoil the fun to be had with this game, and the 3D element just makes it more exciting for the younger players, as there is nothing quite as satisfying as watching your opponents balls roll all the way down back to their starting point after you have just knocked them off, at least I think that's the case, I ended up being the one that got knocked down.

The only downside that this completely enjoyable game has is the setup time, so I recommend once it's all out together leave it together. Otherwise this is one I happily recommend to all.

Absolutly love the classic game of ludo. 3d ludo is still the classic game yet all dressed up, and it does dampen the game slightly. It does take a while to set the board up and pull down. You also have to be more careful when playing, a sudden sneeze, table bump could end up sending everyone to their homes.
Fun none the less to send your opponents pieces rolling home right when their on their doorstep.

I have seen and played a couple of different versions of this game over the years. This one is definitely something different. For a start off, the board set up is a real brain-bender. You open the box to die-cut cardboard pieces you have to punch out of their surrounds before you can assemble them into the 3d board configuration for game play. If you don't feel up to dismantling and re-assembling, I would suggest finding a place where the board can be left undisturbed if you plan to play often.

Game play is standard Ludo rules, but as in the description above, there is a little more to the 'sending an opponent home' bit than just landing on his/her place. An extra degree of fun and enjoyment. I had a few thoughts on more 'adult' variations on the game while playing it with my partner the other night, including 'forfeits' for dropping the opponents' piece off the board and so on...

Overall, a great twist on a family classic. Perfect for rainy days at home or parties with friends.

You've been betrayed and left for dead. Now you're taking revenge, unless the city gets you first. Mob bosses need a favor, crooked cops need help and street gangs want you dead. You'll have to rob, steal and kill just to stay out of serious trouble. Anything can happen out here.