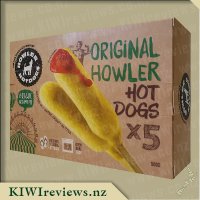 The Original Meaty Bite, coated in a super crispy batter.

I love hotdogs - have done so for as long as I can remember. That means I have tasted some great versions and more than a few utterly diabolical travesties that had me looking sideways at the sausage wondering what "meat" they used in it, and whether I was going to chip a tooth on a flea collar buckle or name tag inside. However, having tried some of the Gourmet range from Howler previously, I had a fair idea of the quality I could expect and I wasn't disappointed.

Simplicity to cook - even using the small benchtop oven I have for cooking meals-for-one - these turned out great. My only slight concern was that batter shell. I found it quite dense, and when I left one hotdog in the oven just 2 minutes longer than the others, it was quite hard to break through the batter and reach the sausage hiding inside. I don't own a deep-fryer, nor would I willingly use one because of the copious amounts of oil it requires to run one, so I can only speculate that such a cooking method may prove more adept at creating a softer batter coating. My recommendation, if oven-cooking these, is to pay close attention, turn regularly, and pull them out as soon as the batter starts to go tan up.

Overall, I am a fan indeed. I haven't had much luck finding them in supermarket freezers though, so until I do I can't really speak to the value for money, because the price is still unknown at the time of this review. However I would say that with 5 hotdogs in a box, as long as the price works out to be less than $.2.50 per hotdog, I would be quite happy to buy a few boxes of these to stock the freezer against Mr 9's sudden bouts of hungry 'junk food' craving. He'll think he's getting a junky treat, but I'll know he's getting quality food.

My family have been enjoying the different varieties of Howler Hot Dog we have had to review. If I had to chose just one variety to buy again it would be the original as we all enjoyed it. These hot dogs reminded me of the hot dogs you buy at the fair, except these are a much better quality and I don't have to queue to get them.

The price is much more affordable too at less than $2 each, it is even less than you would pay for a hot dog at the local fish and chip shop. I like the convenience of having them in the freezer so you can just pop them in the oven to have as a quick dinner. You can add some oven chips and dinner is ready before you know it and faster than you could go and get takeaways.

I chose to cook mine in the oven as I don't have a deep fryer and I don't want to add more oil to our diet. I had been concerned that this would leave the hot dog quite bland but instead I found it was perfect. The batter was crisp and the flavour spot on. I served it with a variety of sauces so the adults could have chilli and the kids could have the traditional tomato sauce.

I will be searching for these hot dogs in each supermarket I go into as they will be a great standby in the freezer for our lazy or rushed dinners.

Hot Dogs are one of those foods that my family and I always make a point of getting when we are out and about at a event such as the stock cars, circus or a fair where there are lines of food trucks and caravans all lined up selling deep fried hot dogs and chips, which are then drenched in tomato sauce, there is something about the aroma of these cooking that sucks us in every time, even though we know that they really aren't the healthiest thing for us to be eating and that really the sausages used in the hot dogs are rather unpleasant tasting! So when I saw these Original Howler Hot Dogs up for review I jumped at the chance to try them out knowing that my family was sure to love them.

I was impressed to see that the hot dogs came in a pack of 5, as most such products always tend to come in 4 packs, but this having 5 hot dogs in it meant that my family of 3 was able to have these for dinner one night and that there would still be 2 more left for Miss 4 and myself to enjoy one night for dinner when her dad is working a night shift. The box was attractive and eye catching and I loved how even just by looking at the front of it I was able to see what a great looking product I was getting and also just how easy these seemed like they would be to cook and prepare, the fact that these were made in New Zealand was also a good thing to me.

Cooking up these hot dogs could not have been easier, with the first 3 hot dogs I popped them into the oven as per instructions and found that 16 minutes cooking time was perfect, I turned these once after 8 minutes of cooking time and found that these were cooked to perfection a hot sausage inside crispy, golden batter, served alongside a salad and some wedges this made a perfect light and easy dinner after a day at work which my whole family loved and devoured. My partner and I agreed that these hot dogs although not full of flavour were so much better than the ones you find at fairs as they were a lot meatier and were not dripping with oil, they were much more pleasant. With the 2 remaining hot dogs Miss 4 and I cooked these up for dinner again one night when it was just the 2 of us at home, however this time we used the airfryer rather than the oven for cooking. We popped the hotdogs into the airfryer and within 15 minutes they were cooked, no turning required, again they were cooked perfectly crisp, golden batter that was cooked the whole way through with no gluggy patches. We served these with tomato sauce which accompanied them great.

As far as cook at home hot dogs go these are the best that I have come across and for this reason I will without a doubt be buying them again, so much healthier and better than any others I have ever tasted and they make such a quick dinner or snack. 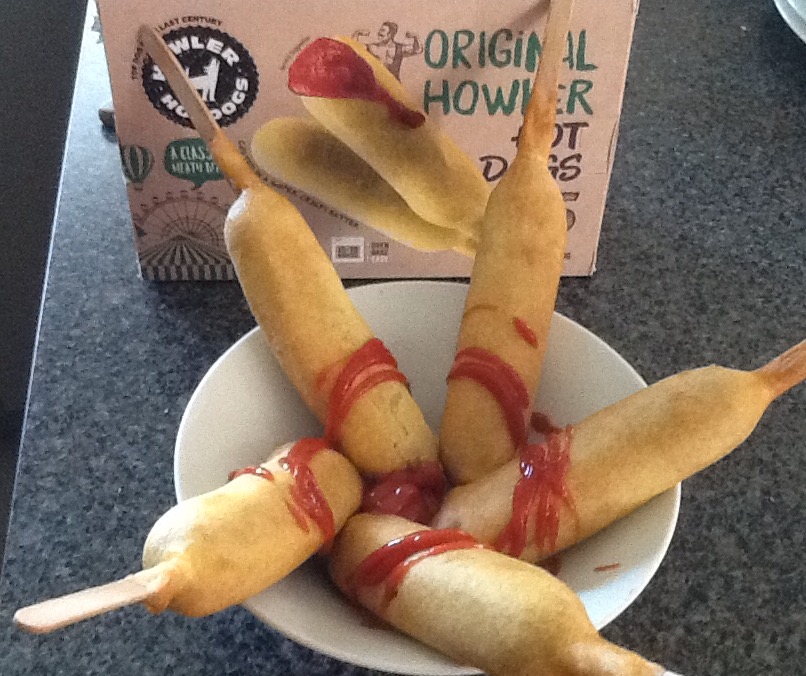 The children really loved this variety. It offered everything you would expect from a hot dog - meaty with just a thin layer of batter, and designed to be the perfect meal choice with the addition of lots of old fashioned tomato sauce. The young ones did not need telling a second time. Once the hotdogs were ready, the sauce bottle was upended over the lot and anyone who was not into sauce could always donate their share to Mr Seven - he was more than ready to demolish all five on his own once he had taken his first mouthful and given it the thumbs up!

Personally, I prefer a more sophisticated sauce, but I went along with the children's choice on this occasion. However, I did eat the sauced half first and then ate the other (plain) end of the hotdog so I could get an impression of the product itself.

When I had checked the list of ingredients on the packet it appeared that the meat content was not as high as I might have expected, but the taste did not indicate this. I felt I was getting a good solid amount of meat in each bite, with a reasonable flavour that I actually preferred without the artificial tomato sauce dunking. I have eaten hotdogs in the past that are all bread filler and grease, but these are neither - they are a reasonably healthy choice given that they are baked and don't contain too many nasties.

I love the logo on the packet ("ALL THE FUN OF THE FAIR") because it immediately reminded me of my own kiwi childhood when hotdogs on sticks were a must if you wanted to enjoy the whole showtime experience. Easter shows, summer shows, winter shows - the hotdogs were an essential food at all of them at a time when ethnic alternatives were not widely available and the kiwi staple was fish-and-chips. If you emerged from the showground gates with tomato sauce smeared down the front of your clothing and greasy smudges from where you had wiped your hands down your sides, you had had a seriously good time! This product creates fond memories of those days for us older folk, but without the less healthy additives and cooking methods.

One word of warning. We baked them according to the directions on the packet, but when we took the tray from the oven, we found that the wooden sticks were really hot. If children are preparing them it would be wise to suggest they assume the entire product is going to be hot, not just the hotdog itself, and use tongs or an oven cloth to remove them. Our two (aged five and seven) are well and truly into cooking but always do need supervising when the oven is involved. Apart from that, the instructions are pretty well foolproof and the result was cooked to perfection.

Verkerks Traditional Aged Salami is made according to the processes Aalt learnt in Holland in the 1940s. Natural fermentation and further aging provide a distinctive rich flavour. Available in Chorizo & Venison, Red Wine & Chilli.