Too Much Poo review 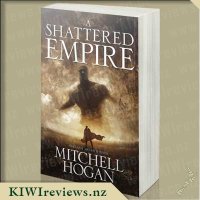 Disclosure StatementFULL DISCLOSURE: A number of units of this product have, at some time, been supplied to KIWIreviews by the company for the purposes of unbiased, independent reviews. No fee was accepted by KIWIreviews or the reviewers themselves - these are genuine, unpaid consumer reviews.
Available:
at all good booksellers

In a battle of armies and sorcerers, empires will fall. After young Caldan's parents were slain, a group of monks raised the boy and initiated him into the arcane mysteries of sorcery. But when the Mahruse Empire is attacked, and the lives of his friends hang in the balance, he was forced to make a dangerous choice.

Now, as two mighty empires face off in a deadly game of supremacy, potent sorcery and creatures from legend have been unleashed. To turn the tide of war and prevent annihilation, Caldan must learn to harness his fearsome and forbidden magic. But as he grows into his powers, the young sorcerer realizes that not all the monsters are on the other side.

And though traps and pitfalls lie ahead, and countless lives are at stake, one thing is certain: to save his life, his friends, and his world, Caldan must risk all to defeat a sorcerer of immense power.Failure will doom the world. Success will doom Caldan.

I am not afraid or ashamed to admit that I am not really a big fan of fantasy stories - I can suspend my disbelief and accept some outrageous assumptions in stories, which is why science fiction appeals to me - however attempting to deal with a lot of the inter-character unrealities is tough for me. However, one of the huge drawcards of this series for me was that there wasn't a lot of superfluous emotionally-laden stretches, it was more action and plot progress than pauses for the hazy, dreamy soulmates-in-love sequences.

In this final chapter, we are carried full circle - from the battlefronts outside Riversedge, through Kelhak's temporary palace in Anasoma, to hidden cities, to strange wild places, and back to the battlefronts for the final confrontation that will determine the fate of Caldan's world. Our protagonist finds himself in a very dangerous potion - wanted by the powerful, feared by their generals, desired by three sides of the conflict only to discover a fourth... and over it all looms a number of secrets so great, so old, so powerful, that they span across the dimensional barriers between worlds.

Caldan's progress in the mystical arts is matched only by his emotional and ethical growth. He is tempted by powers beyond his wildest imaginings, and discovers in himself a strength of will and mastery of spirit that few could ever hope to achieve... and indeed, it shows him to be more powerful than Kelhak in many fundamental, and vital, ways. While he will plan to fool some of the most powerful entities in his world, whether he succeeds, and how well, will be determined not by Caldan's actions, but by those he seeks to destroy and evade.

I found this story to be one of the most powerfully engaging ones I have read in a long time. I found myself inventing ways to make time away from my daily tasks to sneak in a few more minutes to read just one chapter more. There have not been that many books in too many years that have managed to create that kind of desire to read over all else, to trigger that urge, even more than the first two books in this series. That surprised and impressed me greatly.

Overall, I felt this book to be one of the best in this genre to come around in the last few years. I loved how the "magic" in this world wasn't abstract, one simply doesn't wish and it happens, nor does it require some supernatural creature to focus or grant it. In this world, Mitchell takes "magic" and makes it a fundamental force of nature - like light or electromagnetism - to be shaped and directed, or let loose to wreak havoc upon the land, in a manner that could be equally applied to such things in our world as nuclear energy. When harnessed and used sparingly, it can give quality to life, but if used thoughtlessly it brings death and destruction. A great series for competent readers from teens upwards.

Like all weka, Aroha is curious and smart. When her tastebuds lead her into trouble, she finds herself snatched from her peaceful home in Grey and carried across the countryside. Alone in this strange new place, what is one young weka to do?

Follow her instincts and find her way home, of course. Her journey takes her through farmland and swamp, across rivers and over mountains. Many dangers and other challenges face her but with ... more...