« A Survival Guide For Life review 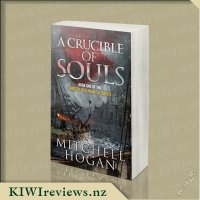 When Caldan's parents are brutally slain, he is raised by monks and taught the arcane mysteries of sorcery. Vowing to discover for himself who his parents really were, and what led to their violent end, he is thrust into the unfamiliar chaos of city life. With nothing to his name but a pair of mysterious heirlooms and a handful of coins, he must prove his talent to earn an apprenticeship with a guild of sorcerers.

But he soon learns the world outside the monastery is a darker place than he ever imagined, and his treasured sorcery has disturbing depths. As a shadowed evil manipulates the unwary and forbidden powers are unleashed, Caldan is plunged into an age-old conflict that brings the world to the edge of destruction. Soon, he must choose a side, and face the true cost of uncovering his past.

As is usual with books that are the first in a planned series, there's a lot of exposition and back-story which can make the story feel a bit bloated and like it's dragging its feet. Not so with this tale... While it did have quiet patches, the plot never stopped developing.

What impressed me the most about this story over others I have read in a similar vein, was the rational basis of the magic system. It had rules and a consistent logic to it, as well as flaws and limitations, though the latter were few for sure. The magic was rooted in physical sciences - in fact it was treated as more of a science or engineering project than something mystical. No sacrificial virgins, no golden goblets of blood, no incense and dimly lit rooms required. Much of it was done in workshops and classrooms. It was extremely refreshing actually.

The main protagonist fits the 'lost heir' trope quite well - orphaned at an early age, raised in a monastery, mysterious artefacts, strange powers and momentous events seem to happen around him. He's a very likeable lad too, but I did find him a little naive. Certainly, that could be attributed to a cloistered upbringing, but even so, he came across as a bit of a wet noodle for a fair chunk of this. With the strife he found himself in at the end of the story though, I am sure a bit of backbone will develop early in the next book.

I found it clever to have no defined good guys or bad guys, just a number of self-serving factions operating at tangents to each other. It felt more real-world, which made it a lot easier to engage with. The subtle twists, the character development and the limited God's-eye overview kept the story manageable despite the huge scope it is covering.

Overall, this has to be one of the best magic-based fantasy titles I have read in the last five years, and I plan to make time to read the next book when it comes out, no matter what. It made me think of the "Chronicles of the Tree" series by Mary Victoria - and that was a fun series to read - only this was better! At 500+ pages, it's a great story for passing away those lazy Summer afternoons and evenings while the air cools down, or the Winter evenings snuggled up in bed.

Husband-and-wife team Sam and Remi Fargo are intrigued when an archaeologist friend requests their help excavating a top secret historical site. What they find will set them on a hunt for a prize greater than they could ever imagine. The clues point to the hidden tomb of Attila the Hun, the High King who was reportedly buried with a vast fortune of gold and jewels and plunder... a bounty that has never been found.