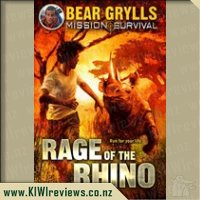 Bear Grylls' Mission Survival Books
Follow Beck Granger on his adventures into some of the world's most inhospitable places, facing unknown dangers and exciting quests of survival. Read extracts from the books, learn about the places Beck visits and some of the animals he encounters.

Young adventurer Beck Granger is invited to South Africa by an old friend of his parents' to help out on a project to prevent rhino poaching. But when he arrives all is not as it seems, and Beck is caught up in something more dangerous than anything he's ever survived before...

Not only are there the poachers to contend with, but somebody seems desperate to track Beck down - whatever the cost. And then there are the hundreds of wild animals...

My Dream : Listen to the Children
Rating: 7.9

100 Most Disgusting Things on the Planet
Rating: 8.3

If you are ever lost in the middle of South Africa dehydrated - did you know that all you need to do is find fresh elephant dung, roll it into a heap and then squeeze it above your mouth and you are saved...... Elephants only eat vegetation and drink lots of water and you will receive enough protein to keep you going for a couple of days at least (sounds like an acquired taste). Also placing a "clean" pebble under your tongue promotes salivation so your mouth will not be that dry.

This book is awesome it is faced paced and you will totally be swept away with it. The chapters are only 5 - 6 pages long so when you get to the end of a chapter you think just one more as so much is happening. I finished the book in two nights, mind you, did not plan to stay up after midnight reading but just kept thinking one more chapter and then next minute it was over.

This is the eighth book in the series and I have read the previous one. It is not necessary to have read any of the other books as he does refer to them. If you were going to read any of them I would say the one before "Strike of the Shark" because it brings in a very important character, and think helps with this book as you know there history. I am definitely wanting to read the rest of the books especially Way of the Wolf.

The series is written by Bear Grylls, probably best know for the TV series Man vs Wild. It tells of Beck Granger whose parents were murdered and he is carrying on the family business of saving the world. This story sees him being invited to Africa and promote awareness regarding Rhinos as they are being targeted by poachers. During the story he has to use his expert survival techniques to get him out of some hairy situations including a forest fire.

This book is designed for any age group and is an easy read. It is very fast paced and you don't have time to let your mind wander as it is gripping from start to finish - definitely sold on this series. I have never watched Bear Grylls tv series but I LOVE his books.

The Tree is all the world... and that world is dying...

After Samiha is thrown from the docks in Argos City, Tymon is condemned to a life of slavery in a Tree-mine. During his ordeals, he glimpses a vision of his love and becomes obsessed by the thought that she is still alive. When disaster strikes the mine, he is left wandering the tunnels at the heart of the Tree, clinging to the hope that he might find her once ... more...