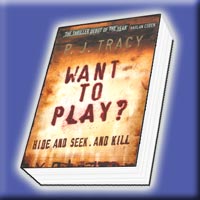 Disclosure StatementFULL DISCLOSURE: A number of units of this product have, at some time, been supplied to KIWIreviews by the company for the purposes of unbiased, independent reviews. No fee was accepted by KIWIreviews or the reviewers themselves - these are genuine, unpaid consumer reviews.
Available:
1st September 2003

An old couple knelt side by side in an otherwise empty small-town church - their heads resting on their hands in a picture of devotion. Both had small, tidy bullet holes in the backs of their skulls.

To local police, their slaying looks like a one-off act of retribution.

At the same time, in Minneapolis, teams of detectives are scrambling to stop a sickeningly inventive serial killer striking again in a city paralysed by fear.

No one makes a connection.

But when the two separate investigations converge on an isolated Catholic boarding school, decades-old secrets begin to fall away. it seems an old killer has resurfaced. But one whose identity still remains dangerously out of reach.

Make sure you've locked your door...

The Prince Who Shrank
Rating: 9.3

All the way through this book I was thinking I had a handle on things and knew what was being done, to and by, whom... boy, was I ever WRONG!

A well executed storyline and rich characters made this a book I was glad to pick up. I am a reasonably avid follower of 'Reality shows' and like to read about cops and crimes and how the one works to solve the other, but but this is the first book I have read that has had an added 'Twist in the Tale' as it were... Although the story did take a little time to pick up, when it did I found myself being carried along effortlessly.

This one is a strange book. All the way through, you think you have a handle on things and know who's doing what to whom... but you're WRONG!

A good sized book, with a great plot, well executed storyline and rich characters, this has to be a must-read over the fine weather summer days. Sling the hammock, grab the jugs of iced drink or beer, and settle back for an awesome way to blow a day away.

But, beware, no details are left unspoken, and this IS a book about catching a serial killer, so be ready for some gore and intimate meetings with dead people.

Score: 8.8
Product reviews for listing 1111: Ripley's Believe It Or Not! Expect the Unexpected -  Written by Ripley's Publishing

This 256-page encyclopedia of oddities offers a wealth of amazing stories and features showcasing unexpected and unimaginable people, places, and creatures from around the world.

FEATURES INCLUDE:
•  Incredible photographs and stories from around the world throughout
•  32 main articles featuring the most sensational entries, accompanied by ... more...