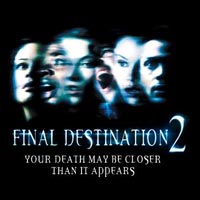 You can't cheat death. You can't hide from death. But you may be able to create a rift in death's design...

On the first anniversary of of that infamous plane crash, a group of teenagers are travelling Route 23.

Suddenly one of them has a vision of an apocalyptic car pile-up that kills hundreds of people. Or is it a premonition? By stopping traffic behind her, Kimberly (A.J. Cook) saves the group from inevitable catastrophic road carnage. But death has it's own Grand Plan and find increasingly inventive and gory ways of finding and dispatching these survivors.

Knowing her turn is coming, a desperate Kimberly realises she must track down Clear Rivers (Ali Larter), the lone surviver of the original plane crash (the first Final Destination movie) - maybe together they can at least stall death's march.

This shock sequel to the cult horror hit is a heart-pounding gorefest laced with irony, wit and truely eye-popping series of bloody executions. You could be next!

This film was actually the first of the franchise that I had watched, and I had little idea of what the movie was about. The opening scene was carnage filled, and showed many events in such excruciating gory detail. But it was a scary, fun filled gory.

For those unfamiliar with Final destination franchise, the plot revolves around someone getting a vision of a deadly event, and prevents it from occurring. At which point "Death" tries again, but always seems to leave clues beforehand.

It is a fun style in movie, as it keeps you guessing. Everyone sees the clues, but trying to figure out how it relates to a possible deadly scenario, it keeps the viewers engaged. I found the film to be very creative, and full of shocks to keep the viewers on the edge of their seats, as the characters run from their predetermined fates. The clearly diverse group of victims made no difference to the overall plot, but I loved watching the diverse ways that these accidents occurred.

There was a needless romance side story, which I assume was to give the film a nice happy story, but the end scene had me in hysterics. I won't ruin it for those who haven't see it. I'll leave that gem for the viewers to see for themselves.

Well now, must say that since I didn't see the first one, the story left me a little lost for the first half an hour, while the characters filled in the gaps with dialog and flashbacks.

It starts with a massive crash pile-up on the highway... which didn't actually happen. Deja-Vu with a vengence, it seems.

I'm going to cut this short for a very good reason... I was bored from minute one right through to the closing credits. The special effects had some merit (hence the attention span rating) and if you can bring yourself to accept that death is guided by some form of intelligence, the deaths are logical and truely inventive, not to mention really really messy.

Based on the best selling young adult adventure series of books by Anthony Horowitz, this story concerns Alex Rider, a 14-year-old orphan who has been unwittingly trained all his life by his uncle with the skills to become a secret agent - scuba diving, mountaineering, martial arts and so on.