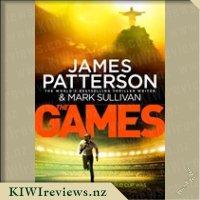 Two years ago, Jack Morgan was in Rio consulting on security for the World Cup. The tournament went without a hitch. Until a man died in one of the executive hospitality suites during the final, and the autopsy showed the cause to be a rare and deadly virus.

The story was kept from the media to avoid causing panic, but Jack feared that the death was no freak occurrence.

Now the eyes of the world are once again turned towards Rio for the Olympic Games, and Jack is back in Brazil's beautiful capital. It is not long before he uncovers terrifying evidence that someone has set in motion a catastrophic plan.

The death at the World Cup was just a warning. The Olympic Games could be the setting for the worst atrocity the world has ever seen,

The Natural Way to a Better Breastfeeding

I am familiar with James Patterson's work but this is the first of the Private series I have read. This one is a collaboration with Mark Sullivan, and is a fast-paced complex tale that had me riveted from start to finish. There is a prologue which is almost a separate entity, but in fact is background to the main story which depends on it as a reference point.

I appreciated the attention to geographical detail. Rio is described from the viewpoint of someone who knows the city well. I have never been there myself, but I have read a lot about it and, from what I gleaned from reading this book, the descriptions are accurate and clearly well researched. I also enjoyed the scientific background to the story. With recent developments in both technology and biochemical research, these aspects of the story are all too believable. The implication is that, if it has not happened today, then it is certainly on tomorrow's agenda.

The book is divided between two narrators - the Jack Morgan character, who writes in the first person, and the third person narration, which fills in the rest of the story so that it dovetails around Jack's. There are two distinct plots which intertwine throughout, eventually culminating in not one but two surprise endings. Although there are these two separate threads, there is enough cross-referencing to keep the reader's attention and I did not feel that it made the storyline hard to follow. But it is an interesting technique and one particularly suited to this context.

The other aspect of the book that really impressed me was the quality of the writing. It is flowing, easy to ready without being patronising, well balanced in terms of dialogue as opposed to description, and understated where necessary. There is certainly a reasonable helping of sex and violence, but it is never intrusive or offensive. There is nothing worse than a story that deteriorates into gratuitous descriptive passages that do nothing to further the plot and serve only to show the limitations of the author's ability with words. I am pleased to confirm that this is certainly not the case with this book.

Finally, I need to mention the play on words in the titles. The book title is "The Games"; the prologue is subtitled "World Cup Fever", and the main story is "A Tale of Two Cities". All three of these have a double meaning which becomes evident as you read on, but it would be giving away part of the plot if I were to unpack them in this review. You will have to read the book for yourself!

Nevare Burvelle anticipates a golden future. He will follow his father into the army; to the frontier and thence to an advantageous marriage.

Over twenty years the army has pushed the frontiers of Gernia as far as the Barrier Mountains, home to the enigmatic Speck people, who retain the last vestiges of magic in a progressive world. Exotic and misunderstood, they are believed to spread a sexual plague which has ravaged the frontier, ... more...