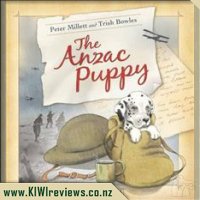 This fictional story was inspired by the story of Freda, a Harlequin Great Dane and mascot of the NZ Rifle Brigade during World War 1. The ANZAC Puppy is a simple story about the reality of war, hardship, friendship and love.

•  A new ANZAC story, beautifully and sensitively portrayed by artist Trish Bowles
•  Background story meticulously researched by the author
•  Freda's studded collar, which bore the inscription 'Freda of the New Zealand Rifle Brigade', is now in the Army Museum at Waiouru, New Zealand, and her headstone will also be there in 2014
•  Gorgeous design by Vida Kelly
•  For fans of The Bantam and the Soldier and The Red Poppy

Recently KIWIreviews had a competition with the opportunity to win a copy of the childrens book 'The Anzac Puppy'. I entered the competition and then promptly forgot I had done so, so I was seriously delighted to come across a 'winners' email from KIWIreviews one morning, telling me I had won a copy. The timing was perfect as miss 7, my most avid reader, whom is addicted to books and reading, was just in the process of learning about ANZAC, and family history at school.

When the book arrived, I sat the unopened package on miss 7s bed for when she got home from school. I love hearing the excitement when she spots the now familiar KIWIreviews sticker on a package. It brings her such joy, especially when books are involved. She instantly tore open the package that got all giddy with excitement because the first two things she saw was the word ANZAC and the picture of the puppy.

We immediately sat and read the story together. Some of our most favourite memories involve books. The ANZAC puppy is a beautiful heart-warming tale of friendship. It shows the misery and sadness that was the war, encompassing the miracle that is friendship. It is a beautiful story even with the reality that caused it.

Miss 7 and I were both surprised when the story was finished and we turned the page to discover the story was based on a real New Zealand dog and person. And that the next pages were true facts and photos about this. This part of the book really bought home the essence of the story and although it made miss 7 a little sad at the reality of it all she loved it. And yep the next day the book was lovingly placed in her bag to be taken to school to share. I highly recommend this wonderful childrens book to everyone, young and old.

I haven't seen many friendly war books about and with my family having a lot to do with military and we always attend ANZAC parades, talking to them about it gets hard sometimes. I had an Aunty in the army, my grandfather was in the navy and always walked in the parades (sadly passed away last year 2013, just before the 100th anniversary of WW1). My step dad is ex navy, my sister and husband both now ex navy so its been a long list. With us still attending ANZAC day even though all family are no longer in the military it still means something and its something we still teacher our children (5yrs and 4yrs).

This story just tells is so right with guns firing, pictures show what went on to give us the life we have now, the amazing part was the puppy Freda who grew with Sam and kept him company. What a strong guy and puppy. My children asked questions as we went, thus the book taking us 15 minutes to read. I really love that the pictures made it feel like war would of felt like, dark and gloomy with lots of explosives going off.

Having the funeral shown in the book meant a lot to me aswell, this was great to show my children that not everyone came back, they fought as hard as they could but not everyone made it. The story is amazing and has one amazing end that ties very very well into the beginning of the story.

If you are a NZer and haven't got this book yet its a must with the 100th year from world war one coming up on the 25th April 2014. It means a lot and this supports all those soilders that fought for our freedom. Love it thanks so much. If I had the money I would love to buy all my friends one for their children but I don't have that kinda money so come and buy it :)

There are very few stories available for young children about war. I was delighted to see The ANZAC Puppy added to this small collection. As the title suggests the story's central characters are a soldier and a his puppy that accompanies his to the front. Although it is about a cute puppy the reality of war is still there. There are pictures of soldiers bandaged up and talk of friends dying. There is also the harsh reality for those that are left at home that times are very hard as Freda the puppy has to been given away because the family doesn't have enough food.

I read this story to my girls (5.5 and 4 years old) and although my youngest listened to it she didn't really comprehend the story. My eldest was able to understand most of the story and we had a good discussion about the book and war. I think the book would be best suited for five to eight year olds but as an adult be prepared for the questions and discussion that it will bring out.

As a reader I found the book very emotional and although it has a very happy ending I was crying uncontrollably. I had to explain to my children why I was crying and my husband told me "Kid's books are supposed to make you cry." Another warning for adults: Keep the tissues handy. (Although I am someone that cries easily.)

I found it interesting reading the notes at the back of the book about the real Freya and Sergeant Ashby that inspired the book. This was a bit too wordy to read to my daughters but I retold it to them. It became a good lesson in how writers can take a true story and use it to inspire their own story, much of which was different to the original.

This book is brilliantly done. The pictures of the Western Front are very dull grim colours and black and white Freya seems to stand out among the grey and khaki. The pages post-war are much brighter and lifts the whole tone of the book.

My one gripe about the book is they have written the acronym ANZAC as Anzac in the title.