« Child of the Prophecy review 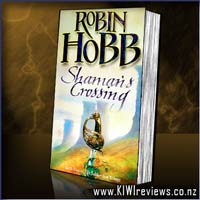 Disclosure StatementFULL DISCLOSURE: A number of units of this product have, at some time, been supplied to KIWIreviews by the company for the purposes of unbiased, independent reviews. No fee was accepted by KIWIreviews or the reviewers themselves - these are genuine, unpaid consumer reviews.
Available:
7 Jul 2006

Nevare Burvelle anticipates a golden future. He will follow his father into the army; to the frontier and thence to an advantageous marriage.

Over twenty years the army has pushed the frontiers of Gernia as far as the Barrier Mountains, home to the enigmatic Speck people, who retain the last vestiges of magic in a progressive world. Exotic and misunderstood, they are believed to spread a sexual plague which has ravaged the frontier, decimating entire regiments.

Such beliefs will affect Nevare's military training at the Academy, where he will experience injustice and foul play. But his world view will also be challenged by his unconventional cousin Epiny. And on Dark Evening, as the carnival comes to Old Thares, it will bring with it the first Specks Nevare has ever seen...

I've been an avid fan of Robin Hobb for years and have read all of her books I've been able to lay my hands on, so jumped at the chance to read a new series of hers!

I was a little confused at the title of this book until about halfway though when Nevare was spending time learning from one of the 'enemy' - a member of one of the plains' tribes - and went through a life changing moment...
But I'll leave you to find out what that was - needless to say, it affects him for the rest of this story, although I am interested to see what will come of it during the next books in the series...

Basically (for those of you that want a run down of the story), this is the story of Nevare - the second son of a New Lord, which according to the religion on this place and time, makes him the son who will be a soilder (all the sons have prescribed occupations from birth).

The story works its way through Nevare's life, detailing the momentous moments he goes though in the lead up to attending the King's Academy, where he will learn the quailities and skills necessary to become a military commander...
There are tender moments showing Nevare's courage - even when his father can't this side of him, his steadfastness and his loyalty to those he calls 'Friend' - though Nevare is a very real character and definitely has his moments of less than stirling behaviour (like most young men).

There is a big deal made about the Specks, or The People as they call themselves, but there is not all that much said about them during large parts of the story... Robin Hobb often does this though, firmly establishing her characters - such as Nevare in this case - before she moves into the depth of the story. I look forward to finding out more about these enigmatic people as I read more of the series...

While the magic/fantasty side of Robin Hobb's work is fairly explict in many of her other books, in this, it is for the large part a subtle thing at this stage... there is talk of "Keep Fast" charms and old magic, there is cousin Epiny who is embroiled in the Queen's fanciful notions of seances and aruas...
But there isn't the overt magically influences things in this book like you may have read in the "Liveship Traders" books...
However, I found this to be refreshing and I know, from previous experience, that the true magic of the story will come...

Cartoons have been an essential feature of The New Yorker since the magazine's founding, in 1925, lovingly devoured by readers, clipped, collected, shared, and remembered. Viewed together - as they can be here, for the first time ever - they form a comic chronicle of American life and times, eight decades of vibrant, concise, and up-to-the-moment commentary on subjects ranging from the mundane to the magnificent. And let's face it - they're ... more...