« How Not to Do Things - The Corporate Saboteur's Guidebook review 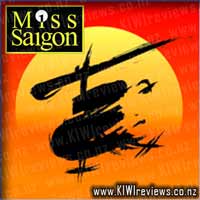 Disclosure StatementFULL DISCLOSURE: A number of units of this product have, at some time, been supplied to KIWIreviews by the company for the purposes of unbiased, independent reviews. No fee was accepted by KIWIreviews or the reviewers themselves - these are genuine, unpaid consumer reviews.
Available:
August 14th to 29th

Set in 1975 during the final days of the American occupation of Saigon, Miss Saigon is an epic love story about the relationship between an American GI and a young Vietnamese woman.

Kim is working in a sleazy Saigon night club owned by a notorious wheeler-dealer known as 'The Engineer'. John, an American GI, buys his friend Chris the services of Kim for the night. That night will change their lives forever.

Three years later, the US Army has fled Saigon. Chris has returned to America and, believing Kim is dead, marries an American women named Ellen.

However, unbeknown to Chris, Kim is alive, has left Saigon and is living in poverty with her three year old son, Tam, in Bangkok. When John tells Chris that Kim is alive and has bore Chris a son, Chris and Ellen go to Asia.

When Kim learns that Chris is in Bangkok with his new wife, all her hopes to be reunited with him disappear. She is desperate for her son to have a future in America with his father and will make the ultimate sacrifice to achieve this.

After enduring unspeakable torture, Dean escapes from Hell, rescued by an all-powerful creature he's never seen before - an Angel - a warrior of God who recruits Sam and Dean into Heaven's battle against Hell. And there are whispers that a certain fallen angel will soon be freed from his prison deep in Hell: Lucifer. If Sam and Dean can't stop it - if Lucifer walks free - he'll bring on the Apocalypse.