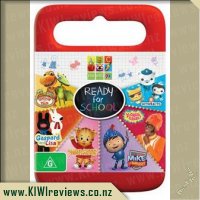 Get ready for school with your friends from ABC for Kids. In this collection of episodes go to school with Daniel Tiger, Gaspard and Lisa and the gang from Yo Gabba Gabba! Sign up for Mike the Knight's Knight School, learn about Dinosaurs with Buddy on the Dinosaur Train and find out about marine creatures with the Octonauts.

We were lucky enough to be given this for review in the latest round of goodies. I was pleased to get this DVD as my daughter is quite into Dinosaur Train. We have a selection of the dinosaur toys and books as well. However, we haven't seen a lot of the TV series. Having an episode of Diinosaur Train on this DVD was so good.

I especially liked how educational the episode was. The dinosaurs ask a lot of good questions about what happened before the time of the dinosaurs. They use all the right period terms, and they educate the viewer on what was before dinosaurs. My 7 year old enjoyed this episode, as she has always had an interest in dinosaurs. My 2 year old loved watching the animated dinosaurs on the screen and their antics.

Daniel Tiger and Gaspard and Lisa were good episodes, and shows which my kids usually enjoy on TV. Miss 2 watched happily, though Miss 7 disappeared during these shows back to her computer. I liked the Gaspard and Lisa's science project. It was very cool.

Mike the Knight bought Miss 7 back again, and they watched happily together. I personally find Mike the knight a bit ho hum, but the girls like him. He gets it right in the end, so I suppose that is something.

Yo Gabba Gabba is such a weird show, but despite that I kinda like how different it is. My husband walked through the lounge as it was on and commented "weird". It is like someone was having a 70s acid trip and thought "this would make an entertaining TV show".

The last episode on the DVD was the Octonauts. I had never heard of the Octonauts, but my 7 year old knew who they were. She is bird mad, and loved the penguin in this show. She sat with me watching and asked a lot of questions about the shark that was featuring in the episode. We then Googled the Lemon Shark to see what else we could learn about it. So I think I'd like to get more of that show in the future as it was educational and fun to watch.

This DVD did well to keep the going to school theme across the episodes. Though I think the Octonauts was a bit of a stretch, I was glad it was in the mix. I couldn't find a retail price for it, but it's not likely to be more than $16 for the disc which is reasonable for kid's entertainment these days. Plus we can replay and replay it.

This season of The Librarians, our heroes embark on new, action-packed adventures, risking their lives once again to save the world. They face off against Santa's brother, the patron saint of theives, try to save a town plagued by ghosts from the civil war, battle a casino that steals luck and endure a body swapping fiasco. But, their greatest challenge will come from within the Library itself...