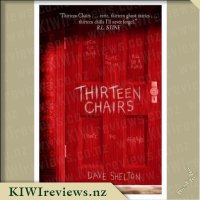 Jack stands in the dark on the landing of the old house, and looks at his feet - He has been here for minutes, his hand on the door handle, debating whether or not to go in. A high-ceilinged room lit only by candles. Thirteen chairs, one empty. Twelve ghostly storytellers, waiting to begin. Come in! Take your place. We have been expecting you. Do you dare to listen to our stories? Do you dare to tell your own? Jack is a curious boy. Are you curious too?

The Triumph of the Sun
Rating: 7.5

I was aware before I started reading "Thirteen Chairs" that the book would consist of a series of short tales linked together in some way by a back story told by a narrator - this is a well-established technique which has been around for centuries. "One Thousand And One Nights", which could date back as far as the ninth century, used this style; so did Chaucer's "The Canterbury Tales" which was written in the fourteenth century! And there have been many since - and, in nearly all cases, the Frame Story rewards the narrator with a special prize. In "One Thousand and One Nights" the prize was the girl's life; in "The Canterbury Tales", the prize was a slap-up meal. In "Thirteen Chairs" the "prize" is not revealed till the end of the book although there are numerous clues along the way.

There are 13 tales within the frame of the story. The pale man (identified as Mr Osterley only at the conclusion of the first tale) is the organiser of the group, and Jack is a boy who is curious to find out what is going on at the meeting and is also the narrator. It is clear that the other 12 have been expecting him, and they welcome him to their gathering. Initially he does not know the purpose of the meeting, but he quickly realises that everyone is expected to tell a tale in his or her turn, and that he too will need to contribute one when the time comes.

As the story progresses, each of the guests tells his or her tale. A clue is added at the end of each tale until the finale is reached. The reaction among the storytellers is starting to heighten and become sinister by the time the seventh tale has been told. I did like the way that the scary factor built up so that in the end I was hoping I had correctly guessed the ending. (I had!) The first clue, of course, is in the book title itself because the number 13 is said to be unlucky.

I found the individual tales intriguing although they varied in quality. In some the conclusion was obscure, leaving me to wonder what exactly happened. In others, there was a definite ending. There was a common theme of revenge in several of them, while others relied on shock value to cause a little tingle down the spine of the reader.

I think the two I enjoyed least were "Tick, Tick, Tick" and "Snowstorms" because for me they did not maintain the momentum which is the hallmark of a good horror story. Having said that, I am aware that the author deliberately wrote each tale in a style that suited that character's personality. My favourites, on the other hand, were "The Girl in the Red Coat" and "Unputdownable" because they were complete in themselves and had a good solid, if predictable, ending.

If you want a horror story that is not TOO scary and think you are a good detective so you can pick up the clues along the way, then this is a book for you. I liked the idea of a challenge to the reader to figure out exactly what was going on, and because the book is divided into sections, you do not have to read it all in one go. Unless, like me, you want to find out what finally happened!

It's fairly well recognised that curiosity killed the cat, but what about curious young boys? This is a book that jumps straight into its story... or is it stories? There is a collection of ghost stories within the main book, and just as many twists and turns. Jack enters a room which contains thirteen chairs, thirteen flickering candles, and an odd collection of people, varying in ages and in different types of dress, but all of them, ghostly pale. One man stands "You will be joining us" it is a statement, not a question.

This book encourages the reader to work out the story behind the twelve story tellers, and it takes a while before it begins to dawn on you, the reader, that there is a possibility that 'this' is all real. As a reader every mini story is a rich and chilling experience. There is an illustration preceding each short story, these are black and white, but even so they are gory to view. As each short story finishes and another candle is extinguished, the reader is brought back to the main story and character, Jack.

I am an avid reader, but this idea of multiple stories within a main story is a little different and because of the vein of the stories it reminded me of the television series 'the twilight zone'. With the narrator reflecting on each 'story' and then another story would begin. I have to make it clear though that I really enjoyed this concept, and it stopped the book from having the predictability that horror stories or ghost stories can have. There was a good thrill, and scare factor within the 'stories' and I can see that this book will appeal to those teen readers which is great, as it can be a challenge to find good literature for this age group that isn't about vampires or wolves. It would also appeal to those who are slightly older who found delight in the twilight zone!

One day, Tana, Scotty, Zinnia, Andrea and Muzza are zapped by lightning on a footy field and transformed into a team of POWERED-UP heroes known as THE INVINCIBLES. But the clock is ticking - they have 80 minutes before it's game over and their powers vanish!

So when Tricky Ricky hatches a sinister scheme to ruin the reputation of the mighty national team, the All Greats, it's The Invincibles alone who can save them. Can the ... more...