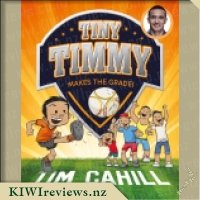 Tiny Timmy's hard work has paid off - he's a star in his school team and now the rep coach is keen to recruit him! But it's a big step up - the kids are faster and stronger and the standard is better than what he's used to. Tim will have to keep training hard and if he gets the chance, he'll need to take it!

The first thing that I need to note with this book, is that Mr Six read the third book in the series first and that is what drove him to want to read the previous books in the series as well. We managed to get our hands on the second book, 'Tiny Timmy Makes the Grade' and it now looks like Mr Six is reading them in reverse order!! He has mentioned that he needs to read the first book now! He is right into rugby at the moment but I think any book about sports and teams will suit him.

'Tiny Timmy Makes the Grade' follows the character Timmy, who loves football and is trying to get into the rep team. We meet some of his friends who train with him and two characters (Hacker and Studs) who are not too good at playing do their best to annoy and tease him. I quite liked the fact that Timmy ignored them rather than buying into their behaviour as he realised that they were most likely just jealous. It is quite an important skill for children to learn, although it may seem like they are being targeted, the teasing says more about the person who is teasing than the recipient. A great talking point to discuss with children.

I can't say that I loved the book that much, although the series has grown on me a bit as I have now read two books with Mr Six. It is a book I read with him as I know how much he loves it. The book is written through the eyes of a child and his experiences with friendships, family and his interest in soccer. As we were reading the book together, I saw little glimpses about how my son might feel about certain things that happen in his life. I can see what he enjoyed in the book as I am sure he often experiences the world in a similar way. The sense of pride when Timmy gets into the team and the feeling of being unsure of himself when he is benched for a number of games to begin with, are all part of the experience of being in a sports team. These are feelings that young children will experience and by reading the book, they will learn through another medium also that they are not alone and these experiences are normal.

I loved the reference to "super sub" near the end of the book. This showed that a team member might not be on the field long but they can change the game in a very short time. The emphasis was on working hard for the time that he IS on the field rather than being upset about missing out. I think that this is a valuable message for children to learn. I also like the reference to the fact that the supporters were there to support Timmy regardless of whether he even made it onto the field. The storyline is quite simple but there are some good messages for children in it. The simplicity is probably what makes the book something that children want to read, as it depicts real life activities of children who are interested in sport.

Some of the words are emphasised using style and size of the font. Initially, it is some of the verbs which are highlighted in this way. As the pages progress, it is a bit more random which words are emphasised. This variation is designed to make the text interesting for young readers and highlight aspects of the game. I noticed that as Mr Six was reading some of the book out loud to me, he used the words which were emphasised to read the text with some expression rather than a flat voice.

I found that the chapters are a lovely length for young readers. Each chapter is around 6-7 pages in length. Mr Six and I read a chapter each as we read through the book and I found that he was extra happy as he got more than one chapter in a sitting! Even though he is quite capable of reading the book by himself, he loved the opportunity to share it with me.

Going from the reaction of my Mr Six, I think that this book (and series of books) is perfect for young kids with a passion for sport. I guess I will now have to hunt down book one!

Score: 9.8
Product reviews for listing 2228: Magic in the Blood
Written by Devon Monk

"I could make magic do anything. So long as I was willing to pay the price..."

Allison beckstrom knows better than most that when magic's involved, nothing is free. She's had to pay its price of migraines and forgetfulness while working as a Hound, tracing illegal spells back to their casters. And even though magic has stolen her recent memory - including her history with the man she supposedly fell in love with - Allie isn't ... more...