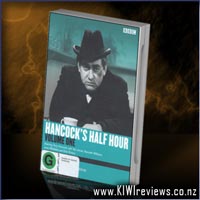 In 1956 the massively popular radio show "Hancock's Half Hour" transferred to the flourishing new BBC television service. Here, Tony Hancock, 'the lad himself', continued his role as East Cheam's antagonistic, socially aspirational misanthrope, as writers Galton and Simpson adapted his role for the small screen.

Tony Hancock died in 1968, and as recently as this year (2005) in a poll to find the Comedian's comedian, Hancock was voted amongst the top 20 greatest comedy acts ever by fellow comedians and comedy insiders. This was over 35 years after his death. This is a testament to his comedy and the man's genius.
Though all these episodes were filmed almost 50 years ago, they are timeless; the humour transcends the years and is as funny now as they ever were which is indicative of the superb scripts written by Galton and Simpson and the comedic timing of Hancock. The scripts could be taken by any other comedian today, and would need no re-writing and they would not bore viewers, though I suspect that it was Hancock who was the main attraction with this series.
The episodes are filmed in glorious black and white and wonderful mono-sound (no fancy technology here), and because they were filmed half a century ago, one cannot expect the quality to be as good as something filmed recently, however, having said this, it does not in any way detract from the appeal of this release.
These episodes are clean, no bad language and suitable for children should they actually want to watch them, I think I was about 15 years old when I first watched them, and found them very funny then, I still find them funny now.
Tony Hancock is well known in the UK, I cannot say how well known he is in New Zealand, however, I feel anyone who appreciated English comedy (well, it is the best humour!) or just comedy in general, should buy this DVD and add it to their collection. I cannot rate Hancock highly enough.
The DVD is well presented, excellent value for money and very watchable, even on repeat viewing. This DVD is well worth the addition to anyone's collection.

While in pursuit of a Maquis ship in the Badlands, Captain Kathryn Janeway and the crew of the U.S.S. Voyager are pulled into the Delta Quadrant. After making a decision that saves an entire species from being destroyed, but leaves both crews stranded, they must join forces to begin a 75-year journey across 70,000 light years of space to return to the Alpha Quadrant, the Federation and home.