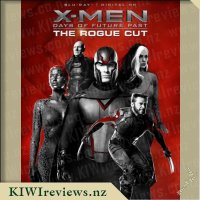 When I heard about this "Rogue Cut" I was a little skeptical. It seemed like just another release purely to get money, that wouldn't really offer the fan any new experiences. But that wasn't the case.

Okay, I will admit I certainly thought that was the case for the first half of the movie as a bit of research alerted me that I was getting an extra 10 minutes of footage, and yet I had not seen anything noticeably different. This did however change in the second half. And while it did little to effect the overall plot of the film, it did clear up a lot of the points in the film that had originally left me scratching my head, and it gave purpose to many other scenes that I had originally deemed as "filler". This cut gives "old" Magneto another big redeeming moment, which is great to see, and provides Professor Xavier with an opportunity to take part in some of the action, as well as explaining how the Sentinels found what they were looking for.

Overall, this cut is nothing spectacularly different. If you had the original, I probably wouldn't see much point in getting the rogue cut. But if you had a choice between picking the Original or the Rogue Cut, I would definitely say this film is the superior.

Get back in the groove with Disney's hilarious all-new movie.

After his wild adventures with Pacha and Emperor Kuzco, lovable lug Kronk, Yzma's former henchman, has happily started a new life as the head chef in his very own diner. However, an all-new wacky adventure begins when a llama-gram arrives telling him that his father is due for a visit.

Before you can say "squeaker, squeak," Kronk is cooking up trouble with the ... more...