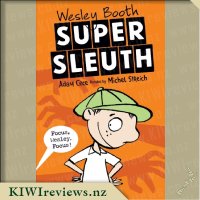 Hub Hill Primary School is in the grip of a crime wave. Wesley Booth is a Super Sleuth - which is like a detective only awesomer - and this is his biggest (and first) real case.

It's not easy when he has to deal with an arch enemy (new-girl-at-school Cassidy Strong), traitorous friends and incompetent assistants, prison warden parents, a delusional big brother, a client who wants to snap him in half like a stick and over eighty-one million suspects.

But he has to work out who the Heister is before his detective equipment gets confiscated and he is grounded forever.

I stumbled upon this book quite by chance. I looked at the cover, decided it was a book for little kids, and did not pursue it for a few days. Then I picked it up a second time and opened it, and it was over an hour later that I finally put it down again. It was hilarious! It would appeal to the target audience (8-12 year olds) because many of the situations will strike a chord with them as they recognise themselves and their friends in the different characters and situations portrayed.

However, the book also has a wider appeal for parents and educators because it is written from the point of view of a child with amazing powers of observation. Not in terms of his sleuthing ability, which is not especially noteworthy, but in the way school and social interactions within peer groups are described from the point of view of an optimistic ten-year-old. Social themes such as bullying, marital breakup, isolation, poverty, friendship issues, and racial stereotypes are all presented in a simple, accessible manner which provokes the young reader into thinking about how he or she can relate to them. The language is kid-friendly and there are just enough "big" words used to make the text challenging but not overwhelming. These words may stimulate the young reader into checking them out, but they can still usually be understood in context.

The accompanying illustrations are bold and simple. I have to admit to needing to stifle the urge to get out the colouring pencils and do some therapeutic additions to the outline drawings - especially towards the end of the book where the colour pink suddenly takes over. (To elaborate would give away some of the plot so this is something you will need to check out for yourself.) I wonder if Michel Streich had that in mind when he produced the illustrations?

I hope Adam Cece is planning a sequel to this book. I enjoyed the way he presented Wesley as the Maths-challenged hero with the tendency to daydream in class rather than concentrate on his lessons. There are lots of Wesleys in every classroom, children who find their inspiration in dreaming about achieving great things as a super sleuth (or super anything else) instead of paying attention to their teacher. I also found the dynamics between Wesley and his annoying older brother very believable. This will strike a chord with every reader who indulges in the occasional episode of sibling rivalry!

SET IN AN ANCIENT TIME, WHEN HUMANS WERE FEW AND SURVIVAL REQUIRED A FIGHTING SPIRIT.

It is a time of drought for the People of the Canyons. Plant foods have been exhausted and small game has disappeared from their hunting grounds. Trei convinces his father to gather a few hunters and attempt a bison hunt, a risky undertaking with their simple wooden spears.