Home > Categories > Books > Sci-Fi > The Gabble - and other stories review

ProdID: 2438 - The Gabble - and other stories
Written by Neal Asher 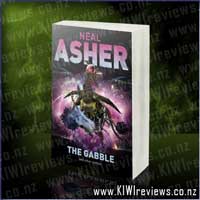 The Gabble - and other stories product reviews

This is a collection of marvellously inventive and action-packed short stories, in which Neal Asher takes us further into the manifold diversities of the amazing 'Polity' universe.

No one does monsters better than Neal Asher, so be prepared to revisit the lives and lifestyles of such favourites as the gabbleduck and the hooder, to savour alien poisons, the walking dead, the Sea of Death, and the putrefactor symbiont.

Through these thirteen stories, welcome to a universe of unbridled imagination, each one of them a delight in itself.

Since I first ran into Brass Man and thought it sounded silly, then found out just how wrong I was to judge it by it's back cover blurb, I have been a great fan of Asher's works. So it was a real treat to get this opportunity to bounce around time in his universe once again, and see some of the 'lateral history' that binds the stories from his other Polity titles together.

Of all the stories collected herein, I was most taken with one of the oldest, "Softly Spoke the Gabbleduck" simply because it seemed to be one of his Polity novels in pure bonsai form... all the characters needed, with enough depth to keep them 'real' without bloating them out, and enough plot and action to keep me hooked, but without any wasted words cluttering things up. OK, there may have been a sentence or two I could have done without, but they were integral to the plot... my only objection to them being that they made me feel just as sickj in the guts as they were designed to. (The communal feeding habits of Sheqs is something NOT to be thought about prior to, or shortly after, a meal, it transpires.)

However, to offset that, the most stunning revelation-plot had to go to "The Gabble" - which brought a number of plot revelations at the end that really were much akin to a sudden stop at the of a slow cruise... like sitting it a sailboat as it runs aground suddenly... despite the fact that for any reader of Asher's works, the revelations have been made before. This is perhaps a downside of reading a collection of short tales that were written back before more contemorary titles, thus spoiling the surprise somewhat. However, that facet not withstanding, knowing *how* the revelations reach the characters is still impressive...

Overall, when it comes to reading collected works, there is usually at least one story from every 8 or so that just doesn't sit well with me... by that reckoning, there should have been no more than 2 in here that didn't 'do it for me' as they should... alas, this was not to be the case. This book bucks the statistical distribution chart... in that there was not a single story I did not find excellent reading, captivating if not outright enthralling, and utterly, *utterly* worth the money to buy and the effort to read. If you like Asher's works, especially his Polity universe, you need to have this one on your shelves!

Score: 9.3
Product reviews for listing 419: The Pleasure of Finding Things Out -  Written by Richard P Feynman

This priceless collection of the best short works of rule-breaking genius Richard Feynman shows his passion for knowledge and sense of fun at their most infectious.

The revealing, inspiring and hugely enjoyable pieces here span a lifetime of enthusiasm for discovering how the world works - including uproarious tales of early student experiments; safecracking and outwitting US censors during the Second World War; his first lecture as a ... more...