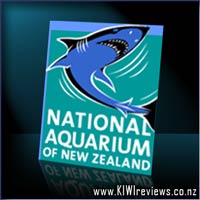 Price:
varies
Available:
All year round

The first interest in building a Hawkes Bay aquarium was expressed in 1938 by a local architect, when it was proposed to build an aquarium against the walls of the salt water baths on the Marine Parade in Napier. However these plans were not realised at that stage.

The first aquarium was opened in 1956 under the War Memorial Hall in the form of a weekend fish show by the HB Aquarium Society. The first weekend show was so popular that another was arranged for the following weekend and a market was recognised. On the 3rd April 1957 the first public meeting was held to discuss the establishing of a permanent aquarium in the basement of the War Memorial Hall. And 8 months later on the 13 December 1957 the aquarium was up and running after 2 bays of the Halls' basement was partitioned off. In its first month of operation 20,000 people had visited the aquarium, with adults paying a shilling and children six pence.

The success of the aquarium in its cramped conditions led to the proposal, of a joint aquarium and dolphin pool. In 1964 an architecture firm was commissioned to design such a complex. The main dolphin pool and the kidney shaped pool next to that were opened in 1966.

By June 1971, 1 million people had visited the basement aquarium and the aquarium executive was still trying to get a new building. In 1973 the planning commenced and the circular 2 storey design with a 350,000L oceanarium was suggested.

On the 10th December 1976 the new aquarium was opened and within the first year had won the NZ Tourism Award as well as the Building Design for a round building made from Square Bricks (Firth).

The aquarium was designed totally as an entertainment facility, whereas nowadays education is an important aspect of most places. This is represented in the new development plans which will incorporate more education, research, passive education (80% of the general public do not want to be educated as such) so the displays will be set up as education with a theme where topics such as ocean currents, mountain to the sea (water cycle), local (i.e. Kidnappers, Hawke Bay) are displayed. The foyer of the planned building is also going to have displays which can be changed on a semi regular basis.

The Hawkes Bay Aquarium has also been involved in a number of research programs in the past. These include assisting DoC with the Tuatara Recovery Programme (the oldest living captive Tuataras hatched in the world).

They have also assisted Massey in coronary studies on Kingfish and Kahawai, and MAF Fish, with the spawning of snapper which are now farmed by Moana Pacific (they now have 4th and 5th generation aquarium stock there).

We were lucky enough to visit The National Aquarium on a weekend trip to get some relief from the quakes. We were there on a wet day which unfortunately meant a damp walk from town because it was only just within walking distance with three children, one of whom has cerebral palsy and walks with difficulty. It didn't appear to be on a bus route that we could see.
Price wise it was fair for this sort of attraction and we would have utilised the family pass option if we had been paying. We had an early lunch in the FishBox Cafe. The food was good for the price and the kids each had a lunchbox which had some nuggets and chips and a few wee treats.
The aquarium was easy to get around and the signage informative and interesting. One of the things we loved seeing was the turtles which had been rescued from the Christchurch aquarium and flown up for care. The travelator through the oceanarium was awesome - we went through so many times and the kids never got tired of seeing the different varieties of sealife around them.
We also watched a diver feed the fish in the big front tank. He was brilliant in that he played to the crowds while feeding the fish and the kids laughed and laughed. I would certainly recommend this as a great family trip out and well worth the cost involved.
If you have a child with a disability then this is well catered for and we had no issues getting around the aquarium. There is a lift available and everything is accessible. The staff were all very nice and lovely to deal with. We will certainly be back one day.

I seldom get a reason to travel north, and when I do it is hardly ever up the east coast. So, when an opportunity presented itself, I made a family outing of it. Allows a broader spectrum of opinions.

It was a very early start, after a late night, so no-one was running at full speed, and I was silently repeating my little pre-11am mantra of "All praise to Lift+" for without it, I swear, I would never get behind the wheel of a car with passengers before noon. With trouble in the Manawatu Gorge slowing traffic, and many roadworks on the journey, it was a long 2˝ hour drive up to Napier, and a further 10 minutes getting onto Marine Parade.

However, after all that drive, we were late for every tour we had booked. With a BTS tour (Behind The Scenes) of the Aquarium arranged for 1pm, we still managed to be running late due to an over-abundance of photographic opportunities at Marineland which held us up. (After all, how many times in your life do you get to feed and stroke a live dolphin?!) Anyhow, back at the Aquarium, staff were busily arranging an impromtu BTS tour for us, despite missing the scheduled appointment. Wonderful service from the friendly lady attending the front office.

While we waited for our guide, we wandered around the front foyer, and read up on the story behind the huge set of jaws, and got our first look at a blue-tongued skink. Not one of those tiny things that can hide under a rock or stick, this baby was a good foot long, nose to tail. Sure enough, the blue tongue, as proven when it gave my 5 yr old son a kiss on the nose, much to his delight.

As we turned away from one exhibit, we were met by Scotty, possibly the most genuinely friendly person I had met that day. With anyone in the tourism, retail or other cold-call situation, there is always a hint of the mask, the face we all wear when dealing with strangers. Scotty had his own face on, and he spent the next 2˝ hours proving it. Our conversations (often) rambled off the aquatic topics, but we still managed to get a comprehensive tour, including a chance to hand-feed Water Dragons and plenty of photo opportunities with exotic critters.

The time flew by, and it seemed like such a short time, and yet the watch never lies, and told us we were again running late for our next stop... so it was with some disappointment we bid Scotty farewell and made our way out. There was so much crammed in during our visit that I decided to take a day or three to mull it all over. The mind needs time to sort and make sense of all the snapshots. So, after much thought, I would have to say the best aspect of this venue is the staff, pure and simple.

I have visited other aquatic displays, some even more involved and complex than the displays here, but this ranks right up top for service, because I have never been so impressed. The displays are well built, detailed and appealing, and they do a great job of bringing their own unique twist to some fairly common displays, such as lizard houses or fishtanks. With very informative signs, captions and staff commentaries there is a lot to be learned, and it is entirely kid-friendly in the public areas.

However, if taking young ones on the BTS tours, be sure to keep them close at hand and in constant visual range. There are places that kids just shouldn't have their hands let go of. So long as basic precautions are taken by parents or caregivers, the tour is entirely safe and thoroughly enjoyable. Especially if you get Scotty as your tourguide and you happen to mention Sci-Fi. He's a goldmine of information on so many topics.

My highlight display would have to be the Water Dragons. Watching the joy on my son's face as he was shown how to call the Dragons over for a tasty snack of grubs and beetles eaten right off the palm of his hand. After much rustling of leaves and slapping of rocks, three foot-long lizards come scuttling over to lick crawlies off his hand, and he loved every minute of it.

Overall, well worth the visit! With easy parking right outside free for 2 hours, along the 'main drag' of attractions, with accommodation as close as the other side of the road, this is a great venue you should make the effort to visit any time you are within an hour of it. The standard entry is around the $13 for adults and $7 for kids, the BTS tours will set you back $25 for adults and $12 for kids. BIG HINT: Make sure you are in NO HURRY when you visit, as it is well worth the time to take the slow tour.

Imagine what it's like to be shrunk down and immersed in a magical world of fantastical creatures living incredible, action-packed lives. With a cast of miniature marvels all less than a foot in size, these superheroes may be small but they pack a punch way above their weight. Chipmunks, elephant shrews, marmosets, scorpion mice, even giant rhinoceros beetles all face drama on a ... more...