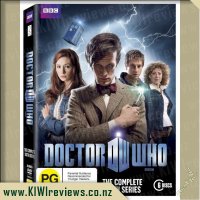 Matt Smith returns as the Eleventh Doctor in Series 6 of Doctor Who in 13 thrilling, brand new episodes. The Doctor together with newlyweds Amy and Rory face monsters, mysteries and adventures across time and space. They find themselves in Sixties America, battling the invasion the world forgot, then journey on the high seas of 1696 aboard a pirate ship, to solve the mystery of the Siren.

They encounter the greatest war criminal in all of history - and Hitler. They also discover there's no scarier place in the universe than a child's bedroom and a visit to an alien quarantine facility reveals to Rory a very different side to his wife. The truth about River Song is out and the time has come for the Doctor to face his greatest demons. In a hotel where walls move, corridors twist and rooms vanish, death lies waiting. But the Doctor's time has yet to come. He has one last stop to make on his final journey - an old friend needs his help and an old foe must be defeated.

Children of the Dog Star
Rating: 8.5

Season Six sees us reunite with the Doctor, Amy, Rory and of course River a couple of times.

We start off with one heck of a whammy, The Doctor dead?!!?!? But as always things aren't always as they seem and before we know it Amy, River, Rory and the Doctor meet their enemy The Silence. There's some fun with them being stuck on a pirate ship and trying to work out just what is going on and then we get swept into a new adventure with the TARDIS and a wonderful two parter with people made of "flesh" which brings about yet another mystery which ends with a great culmination in the next episode.

The last ones in the series are a bit more light hearted, well, a little bit, they still deal with some pretty deep issues and you really feel for them all. I really had fun watching these episodes and I think that they solved part of the mystery that is River Song really well. The character development in this season is really well done and we learn a few more little tidbits about everyone and what is going on and just where it might lead us all in the next season.

A lot of hints had been dropped about River Song and her knowledge of the Doctor so it was great to finally have it sorted and all out in the open (there was a bit that I had guessed but there was also a huge surprise) and the Doctor's face when it is all finally revealed.

There were a few good episodes that were interesting, I tend to pay a lot less attention when aliens and such are always used so it was good to see them doing a lot of history episodes, I suppose when you can travel anywhere and at any time then it gets really difficult to always come up with good ideas on where to go and why the TARDIS would end up there.

As the series go on and get further and further into the story I find that it is getting a lot less believable. I think some of the most memorable episodes include history and not rely so much on aliens and cybermen and daleks. Most kids would be able to tell you that the scariest place on earth has to be their own bedroom at night but of course Doctor Who has to expand on that and introduce a lot that could scare a child.

I'm going to be watching the next series and see how predictable the writers are, there is going to be a lot of aliens and space people

Season six answers a few of the questions that have been raised during Smith's reign as the Doctor and takes you on a fun ride.

"The Doctor's Wife" has to be my favourite episode of the season. The mind of the TARDIS gets placed inside the body of a woman and some of the dialogue between the Doctor and the TARDIS are such fun, with plenty of flirting between the two as well. Highlighting the awesome relationship between the TARDIS and her Doctor is this quote, one I love. "The Doctor: You didn't always take me where I wanted to go.
Idris/TARDIS: No, but I always took you where you needed to go." and of course the TARDIS saying that she is the one who stole the Doctor, not the other way around. So much fun.

River Song is one of my favourite characters in the series, second only to the Doctor, and in "A Good Man Goes to War" we finally are told exactly who she is and what she means to the Doctor and the Ponds in the long run. "Night Terrors" is one of the creepier episodes I've seen from the rebooted series, who wouldn't find that creepy... This is a great season for answering quite a few questions and leaves the next to start off afresh.

I really enjoyed this season and can't wait to watch season seven again.

Confinement is a Team Building game where the group are locked in a room with 60 minutes to escape. They must use "teamwork" to solve a series of logical, mechanical and maths/word puzzles in order to escape within the 60-minute time limit. This creates an exhilarating environment that challenges the group, a great sense of achievement will be felt by those who escape, and those who don't will be left wanting a rematch. The Confinement ... more...