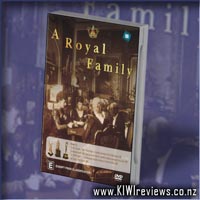 Disclosure StatementFULL DISCLOSURE: A number of units of this product have, at some time, been supplied to KIWIreviews by the company for the purposes of unbiased, independent reviews. No fee was accepted by KIWIreviews or the reviewers themselves - these are genuine, unpaid consumer reviews.
Available:
March 2005

At the end of the 1800's, the Danish King, Christian XI and his wife, Queen Louise, married their six children into the dominating European royal families and Christian XI became known as 'Europe's Father-In-Law.' Today his descendants are to be found all over Europe.

These are their stories, stories of power, love, triumph, tragedy and honour, recounted through interviews and never before published letters, photographs and home movie footage, by over 30 members of the European Royal Family.

Anecdotes handed down through generations give insight into a Europe ruled by 'dynasty politics' where arranged marriages created alliances between countries.

A Royal Family charts the history of the Danish royal family from King Christian IX, who inherited the Danish throne through more of an accident than by direct succession. He then went on, with his wife, to have children who were then married into most of the monarchies in Europe, and their descendants are still alive to chart the history of the man and the family.
This series interviews over 30 members of the royal families of Europe, such as the ex-kings from Greece, Russia and so on, the German royal family, the current monarchs of various countries and countesses, giving intimate portraits into the private lives of some very public figures.
This series gives a fascinating insight into the lives and the history of the monarchs of Europe. The first episode is very much an overview into the whole story, and an introduction into the man who was to found a far-reaching dynasty.
The remaining episodes cover each of his five children, and how there were integrated into the various royal houses of Europe.
The episodes are shot using modern interviews, combined with old films and photographs, they include letters, diaries and other documents. I found them compulsive viewing and they would interest anyone with an interest in the history of Europe, and interest in genealogy and in the monarchy of their, and other countries.

What is better than a tale or two?
Tales about Tails from you know who!

It so happens The Cat knows a log about tails,
there are tails on beavers and even on whales!

You can see how a monkey's tail helps him climb high,
or a rattlesnake's tail warns of danger nearby.

When the kids want to perform a little dance,
they meet a bird named Tango, who teaches a prance.