A for Andromeda anthology review 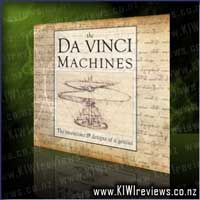 Disclosure StatementFULL DISCLOSURE: A number of units of this product have, at some time, been supplied to KIWIreviews by the company for the purposes of unbiased, independent reviews. No fee was accepted by KIWIreviews or the reviewers themselves - these are genuine, unpaid consumer reviews.
Available:
July 28th - Oct 22nd 2007

Te Manawa is proud to welcome this exhibition into New Zealand as the first stop, and only North Island venue, of this tour.
Leonardo da Vinci dedicated himself with passion to scientific studies in anatomy, biology, mathematics and physics. His manuscripts, known as Codices, exhibit ingenious solutions to practical problems of his time and he was able to imagine future possibilities such as flying machines and automation.

In 1995 the Teknoart group, a team of Florentine artisans lead by the Niccolai firm in collaboration with leading academics, began to produce a series of models using materials of the time: wood, cotton, brass, iron and cord, Every single object is accompanied by the reproduction of the code page from which it has been designed.

The machines are the result of fine craftsmanship as the artisans pay particular attention to detail in order to reflect Leonardo's objectives. Each machine is designed with the aid of a computer to calculate the exact proportions of the models. Over the past ten years ten notable exhibitions have been organised in Florence, Siena, Venice, Naples, Warsaw, Madrid, Hong Kong, Dubai, Vienna and Berlin. All have been endorsed by scholars and have received official patronage by the hosting municipal councils. More recently Auckland and Melbourne have hosted this exhibition with outstanding response from visitors.

This exhibition presents over sixty models grouped in themes: War machines, Flying machines, Nautical and Hydraulic machines as well as devices illustrating Principles of Mechanics. Many are scale models and some are life size. The interactive machines are a popular aspect of each exhibition as visitors can touch and handle these models to gain a first hand appreciation of how they work. Explanatory notes and illustrative panels with Leonardo's drawings accompany each model. The copies of the Codices and computer programs on CD-Rom enhance the scientific, cultural and educational experience of the exhibit.

Walking into the Art Gallery where the exhibition was held, I had no idea what to expect, and I was quite seriously expecting to be bored stupid, as science has never really been my thing. But, my son has been saying for almost a year now that he wants to be a scientist when he grows up (he's only 7 years old, and this is the longest he's ever stuck to the same thing with his plans for the future' lol!), plus we had a weekend afternoon with nothing to do, so I figured that it would be worth taking him to, to at least check it out, whether I enjoyed it or not. Slowly we started exploring the vast collection of Da Vinci's work, and I was blown away as I started to realise just what an incredible man he really was. I had grown up thinking he was nothing more than a painter - a damn good painter, but nothing more than that. Boy was I wrong!! Learning about his life and everything he invented and explored was a totally amazing experience, and both my son and I thoroughly enjoyed the exhibition. What made it even better were the parts of the exhibitions that you were able to actually touch and try out. It was fun reading the blurb about each invention, and then giving them a try and seeing the theory turned into reality... then thinking about it in modern-day terms. There was so much to wander through and read, touch, and learn that I easily spent a couple of hours there, and that's not including taking time to watch the 48 minute long movie about Da Vinci's life, 'Genius', which was fascinating on its own.
Whether you have an interest in science, history, Da Vinci himself, or just have a couple of hours to spare and kids to entertain, this is an exhibition that is well worth going to see - and one I am VERY tempted to go back and wander through a second time!!

This is the second time I have had the chance to view the genius of Da Vinci. The exhibit I went to in Auckland was good, but It has been improved since then. There are now a lot more posters giving in depth explanations and insights into Leonardo's life and what compelled him to make the discoveries he did. The layout of the exhibits was well planned out and, with the benefit of a larger area there seemed to be less possibility of bottle necks round each of them.

I rated the interactivity side of things a little lower because a few of the exhibits that were on stands that meant the handles used to operate them would have made them more difficult for smaller children to use. I had a few problems myself, as I am at a height similar to a lot of children. This is not a huge deal, just something to be aware of.

I found the area set aside for trying out your bridge building skills was well thought out and allowed for younger kids to try it as well. Although I didn't actually watch it, I was able to hear enough of the video playing in the next room to help get a clearer picture of the man.

In short, a great effort from Te Manawa and really cool to have an international exhibition come to our little corner.

After having seen this exhibit on display in Auckland I thought that it couldn't get any better, so this would be a bit of a -yawn- for me, but might be interesting for my son... well, I was half right... it WAS interesting for my little man. You see, an exhibition isn't all about the contents... that's only about 40% of it. What makes the experience is the other 60%... the venue. It's about the space, the atmosphere generated by the way the exhibit is set up, what information is presented, and how it is present. Too subtle, it's pointless, too strong and it's in your face and off-putting... but so it right, and it becomes something so much more than what you are looking at... it becomes why you are there at all.

I honestly didn't think it could be better than what I had already seen, but I am glad to have been proven wrong. Taking over the entire Art Gallery, this display was presented in a world-class manner. Not only was it larger than the one I had seen last year, but more of it was interactive. This was a great aspect for the kids... so long as they paid attention to the colour-coding of the signs (Red means Do Not Touch" and anything else is fair game, with care.) then they are going to have a blast. I was pleased to see, and quite impressed by, the interactive display of the kitset bridge. My young son was astounded to see me build a bridge that could support his weight, using nothing more than 15 small sticks! (Which is why I will be heading for the hardware store next payday to buy some 2-inch dowel and a new sawblade!)

Unfortunately, we were booked on a guided tour, but due to the hassle of finding parking within walking distance, we arrived 10 minutes too late. However, since the tour was about 20 minutes long, we managed to slide quietly onto the last part of it. The actor, who was guiding the tour in the guise of a middle-aged Leonardo himself, did a wonderful job, acting the part of the main man himself. Some of it didn't quite ring right, but then a lot of Leonardo's history is pure guesswork anyways, since he didn't really put himself into his notes. No autobiographical letters to himself, just the facts ma'am. Speculation will surround the man for the next 500 years... if we are lucky.

As we wandered, my son was all big eyes and questions, and enjoyed a lot of the displays and models, ooohhhhh'ing and aaahhhh'ing over things such as the flywheel, the entire flight display, the tank and naval ships models, and especially the optics display upstairs, which is all-new since the exhibit first hit our shores. I admit that for me, the biggest drawcard was the time-lapse footage of the team of artisans who built a bicycle according to Leonardo's designs. Now, having seen the history of the modern bicycle as it dates from the Victorian era, it seems to me that they quite literally re-invented his design from the ground floor up... and didn't do even that very well! (The first acknowledged bicycle from that era was little more than a plank of wood with wheels, and it's primary purpose was to destroy men's leg muscles by getting them to haul their girlfriends around!

Overall, despite my first thoughts, Te Manawa actually managed to pull of quite a double coup, firstly by getting the gig to host the first, and only North Island stop, in this national tour, but also to manage the astounding feat of improving it! The wooden display panels for each model were all produced by the talented design and production team here at Te Manawa, and what an excellent job they did of it I must say, and the sheer scope of the exhibit was beautifully fitted into the Art Gallery. It was big enough to house an astounding array of individual displays, but not so big that they all appeared lost in solitude. I was totally,. mind-blowingly impressed by how much better it was... and I agree with one of the visiting artisans, who was reported to say that this stop-off could show the other museums, world wide, a thing or two about putting on a world-class exhibit. Well done Te Manawa, and thanks for the invitation!

Season three of Star Trek: Voyager begins with the titular space vessel still in the hands of the enemy Kazon, and Captain Janeway (Kate Mulgrew) and most of her crew still stranded on Hanon IV, a desolate planet that closely resembles a prehistoric Earth. Eventually extricating themselves from this situation, the crew survives to embark on innumerable other adventures in their efforts to escape the distant Gamma Quadrant and return to their Starfleet Command home base.