ProdID: 1837 - March to the Sound of the Guns
Written by Ray Grover 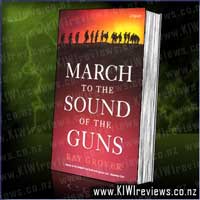 March to the Sound of the Guns product reviews

During World War I New Zealand shipped one hundred thousand young men halfway round the world to fight at Gallipoli and the Western Front. Eighteen thousand were killed - a death rate of nearly one in five. Thousands more were maimed physically and emotionally. The men had gone with the encouragement of their families and the blessings of their churches.

In March to the Sound of the Guns five people tell us the story of their war: the oldest is Colonel Malone, one of the very few who knows what war is about and who trains his men hard but, on going into action, is faced with incompetence at the highest levels. The other four are nineteen-year-olds who volunteer for reasons that derive from the raw colonial society in which they have been born and raised: Harry, the Christian sniper; Jim, the leftwing activist; Frank, the intellectual. Each has no alternative but to endure fear, sickness, wounds, and the immanent prospect of death under the foulest of conditions. Then there is Nelle, the nurse, patching up the remnants of men who have 'survived'.

Sharing much with Band of Brothers and Pat Barker's Regeneration trilogy, March to the Sound of the Guns has been drawn from over twenty years of research into soldier's diaries, letters and memoirs, along with close inspection of the battlefields and study of authoritative historians. It is a searing, searching account of a generation of New Zealanders who went to a war and were changed forever.

The Best of Grand Designs
Rating: 8.8

Picking up this book, I did not know what to expect.

I was blown away by the real life stories, of true Kiwis.
Malone, Harry, Jim, Frank, and Nelle. People who have dedicated their lives, or at least, a significant portion of it, to King and Country.

Not since I read Hell Or High Water have I read of such courage, or been so moved by People, and their stories. Of Dedication, Or Torment, Of Good, and Bad leadership. Of losing, and Gaining men, Friends, comrades..

This book is worth every penny, for the education you gain from it. For the respect you develop for the ANZACs. And for the ride it takes you on.

This is as real as it gets, folks. No nonsense. No hyper-reality. The cold, hard truth. As told by those who have been there, and compiled by a Historian, who currently an Archivist for NZ's Primary War Museum.

I will definitely read this book again, to catch all the parts I missed the first time round, despite the fact that i was quite aware of the hours passing as I read this novel, it was well worth it.

A Must Have for everyone interested in military history, The ANZACs, or the History of New Zealand.

Written in Te Reo - The Other Brother
Translated by Ngaere Roberts

Bertie McQuerty has three brilliant brothers. But Bertie isn't arty, or sporty, or clever. He's sick of being the other brother. What can he do that is brilliant?