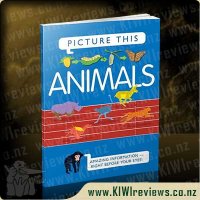 The Picture This series is a programme of no-nonsense reference books, packed with infographics designed to stimulate the minds of today's visually sophisticated, fact-hungry children. Picture This: Animals is a light and entertaining introduction to the facts and figures of the animal world. In some ways a visual dictionary, in other ways a revision guide, the quirkily inventive graphics, icons, tables, graphs, maps and step-by-step illustrations are an entertaining way of absorbing information and understanding tricky concepts.

The fresh, clean, direct and uncluttered design is incredibly child-friendly; each spread transforms a core topic into a visual feast of raw facts, figures and statistics relating to the most essential aspects of the subject.

The Terrible Thing that Happened to Barnaby Brocket
Rating: 10.0

She'll Be Coming Round the Mountain
Rating: 9.2

I'll start off by saying that I love the front cover and as soon as I held it up for my six year old to see he furiously nodded his head and nearly snatched it out of my hands.

The first thing to catch my eye was the colour and illustrations throughout the book. The animals weren't too detailed but they still look so lovely, honestly, if I hadn't liked the book and didn't want to pass it on, I would have done something with the pictures.

They also aimed the pictures to be fun, such as the redback spider dancing on an arcade game and some birds using the claw machines. The pictures really helped to give a visual idea for the written facts, which really helped me too as I am a very visual person.

Nothing was too long, no blurbs of writing were longer than a standard paragraph, making for some good spurts of reading that didn't loose either my six year old or four year olds attention, which coupled with the pictures made for two very interested children. They were both fascinated and the questions just kept firing, which as a mum made me very happy. I really liked the very last page as it had some book suggestions, some website suggestions and some places to visit (only problem with those is we are in New Zealand and not the UK).

This is a delightful book and I will be holding on to this for a while.

Picture This Animals is a book I can see my kids coming back to for very many years. It is one of the few books that I will want to keep for when my girls are grown and my grandkids come to visit simply because it has such a wide appeal to different ages.

My daughter, just turned four, is fascinated by the book. She will thumb through it for hours telling me random facts that she recalls from the book. The other day we visited Hamilton Zoo and she decided to take the book with her to tell the animals what she had read about them. That would have been so cute (and made a great photo to go with this review) but when we arrived she decided to leave the book in the car so it didn't get lost. Since she is so fascinated in animals I can see when she is a little older and can read some of this book herself that she will be amused for ages and stick her head out of the book to tell us an interesting fact.

I will admit that as an adult once the kids were in bed I have curled up with the book and read parts of it myself. I found it very interesting and I learnt heaps of information that I didn't know previously. It goes to prove you are never too old to learn and that the book has a wider appeal than just it's target audience of 8 years plus.

This is a very easy to read book. You don't have to read it from start to finish. We enjoyed opening the book on a random page and reading about the picture that grabbed my attention. So it was great when you only had a few minutes before bed or didn't know how long you would be in a waiting room. There is also a comprehensive index so you could look up your favourite animal, for example. It covers subjects that really appeal to kids such as releasing gas and waste production.

Priced at $21 for a hardback reference book it is fantastic value for money and the ideal gift for an animal fanatic.

For someone who didn't intend to wreck the solar system's fragile balance of power, Jim Holden did a pretty good job of it. While Earth and Mars have stopped shooting each other, the core alliance is shattered. The outer planets and the Belt are uncertain in their new - possibly temporary - autonomy.

Then, on one of Jupiter's moons, a single super-soldier attacks, slaughtering soldiers of Earth and Mars indiscriminately and reigniting the war. The race is on to discover whether this is the vanguard of an alien army, or if the danger lies closer to home.