The Mind Gym - Give Me Time review

ProdID: 1000 - The Last House in the Galaxy
Written by Andy Secombe 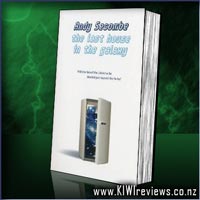 The Last House in the Galaxy product reviews

Across the aching wastes of space a terrible war is raging. The Gologons, long relegated to being the garbage disposers of the Galaxy, have finally rebelled, and now rampage across the universe, led by the pitiless Gulgus Filch. The only thing standing between them and universal domination is a small breakaway faction of the United Planets Federation.

Meanwhile, in rural Devon, Sir Mortimer and Lady Trenchard are trying desperately to prevent their beloved, crumbling Hambledon Hall from falling into the hands of a City whizz-kid who plans to turn it into a weekend conference centre. If the Universe is to have any kind of hope, the UPF needs to find a safe place where they can gather and plan a counter-attack. And because of its handy location at the terminus of a wormhole (opening beside an azalea just beyond the ha-ha), Hambledon Hall is ideally situated to provide just such a haven -

Dinosaurs in the Supermarket
Rating: 9.2

Take Douglas Adams, Terry Pratchett, and The Goon Show. Mix well, add a touch of Tom Sharpe and I think you will have a good idea what sort of book this is. This is English humour at its best. It is hardly surprising when you find out that the author is the son of the late Sir Harry Secombe, that the talent for humour must be genetic.

This novel is described as fantasy, and the author writes for that genre well; however, it is humour and fantasy in which he excells. I was surprised to find out this is his forth novel - I must acquire his back catalogue. The book is well written, the characters are clearly defined and his imagination runs riot throughout this book. The motly cast of this novel could easily make a sequel, and one in which the reader will never get bored.

A little research tells me the author has gone back to acting, but if this book is anything to go by, his writing skills will be a sadlly lost if he ever decides to quit the pen.

I am so enamoured by this author, I must point out his forth novel is due out later this year. The Author's own website says he is penning a fifth novel. If The Last House in the Galaxy is anything to go buy, you will not want to miss the release of the next two books.