What Does The Fox Say? review 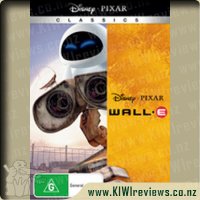 The highly acclaimed director of Finding Nemo and the creative storytellers behind Cars and Ratatouille transport you to a galaxy not so far away for a new cosmic comedy adventure about a determined robot named WALL-E.

After hundreds of lonely years of doing what he was built for, the curious and lovable WALL-E discovers a new purpose in life when he meets a sleek search robot named EVE. Join them and a hilarious cast of characters on a fantastic journey across the universe.

Transport yourself to a fascinating new world with Disney-Pixar's latest adventure, now even more astonishing on DVD and loaded with bonus features, including the all-new animated short film BURN-E. WALL-E is a film your family will want to enjoy over and over again.

This movie started off really boring and I almost gave up watching it but I could hear the kids laughing and thought that I would buy it for the kids as they did seem to be enjoying it.

The animation was great, the story was good but the advertising for the movie and the blurb on the cover need a lot of work. If I had gone by what I read instead of thinking "I wonder what the hype about this movie is? " I would never have watched it. Doesn't matter how good the movie is or the actors involved are if the advertising is sit then not a lot of people are going to want to see the movie.

I would recommend watching the movie when you have time and to expect a very slow start.

This was an overwhelmingly heart-warming story for me. As a nature-lover the vision of an abandoned world due to extreme pollution fills me with emotion (usually the angry ones). But seeing this little mobile garbage compactor trundling along, crushing waste into cubes, it was the most adorable thing I'd seen as of late.

Wall-E was designed to clean up the planet, while the humans lived on a perpetual space cruise of sorts. One of many robots, Wall-E was the last robot standing after many hundreds of years at work. And still he kept on working.

Functioning largely as a silent movie, as robots don't exactly have much of a talking capacity, this film focuses on actions. And actions are what the movie is trying to encourage. This film has an over-arching theme of environmental awareness, warning of the problems with relying on technology, the risks of obesity and a lack of physical exercise, and the overall effects of global corporations on the world around us.

Filled with a wide variety of environments from the dirty scum of a polluted Earth, to the immaculate metallic sheen of a strictly monitored space ship, to the vast emptiness of space itself, Wall-E is a beautifully rendered film, which the minimalist dialogue allows to shine through. A highly enjoyable film for all ages, that could just help encourage the little ones to go out more.

The trailer for WALL-E really enchanted me from the get go and I couldn't wait to see it, it looked like a really fun movie.

What really charmed me about this movie, made me love it even more, and keeps me enjoying it every time is the fact that for the first half of the movie there is no talking at all, well almost none, but it really adds to the charm when all you have is the robot talk from WALL-E and Eve. I had a friend unable to finish the movie due to a lack of talking but I really really loved this movie due to it's lack of conversation.

WALL-E is alone on Earth when Eve suddenly arrives looking for plan life. They end up in space aboard a ship carrying now obese humans who are stuck in chairs and almost no interaction with each other outside of their chairs. The various eclectic and quirky robots are a lot of fun and add a great sense of fun to the movie. We have three main humans, the captain and then Mary and John who end up breaking out of their chairs, in a sense.

This is one of my favourite movies of all time and I love watching it time and again with my kids.

The new season of "American Dreamz," the wildly popular television singing contest, has captured the country's attention, as the competition looks to be between a young Midwestern gal and a showtunes-loving young man from Orange County. Recently awakened President Staton even wants in on the craze, as he signs up for the potential explosive season finale.