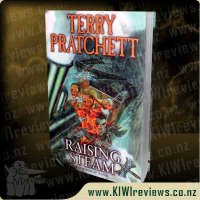 To the consternation of the Patrician, Lord Vetinari, a new invention has arrived in Ankh-Morpork - a great clanging monster of a machine that harnesses the power of all of the elements: earth, air, fire, and water. This being Ankh-Morpork, it's soon drawing astonished crowds, some of whom caught the zeitgeist early and arrive armed with notepads and very sensible rainwear.

Moist von Lipwig is not a man who enjoys hard work. As master of the Post Office, the Mint and the Royal Bank his input is, of course, vital... but largely dependent on words, which are fortunately not very heavy and and don't always need greasing. However, he does enjoy being alive, which makes a new job offer from Vetinari hard to refuse.

Steam is rising over Discworld, driven by Mr Simnel, the man wi' t'flat cap and sliding rule who has an interesting arrangement with the sine and cosine. Moist will have to grapple with gallons of grease, goblins, a fat controller with a history of throwing employees down the stairs and some very angry dwarfs if he's going to stop it all going off the rails.

I'm quite a fan of Terry Pratchett's work. I started reading his books back at University when the group of boys I hung out with, introduced me to the wonder of the fantasy novel. Pratchett being one of the favourites, and a nice departure from the somewhat heavier more gruesome style battle books.

When I had the chance to read this book, I was so excited. When I got it home, it became clear that my husband and I would be fighting it out to the end of the book. Countless visitors attempted to make off with the book as well, and I had to fight them off too! As a result, I often had to hunt the book out from whatever hidey hole hubby had selected.

For me, this book had a different style to the Pratchett books of my youth. I mentioned that to my husband, who has read Pratchett's more recent work. He said that this book followed the style of the more recent books but definitely had a different feel to it compared to Wee Free Men for example. I found it quite difficult to get into at first.

There are quite a few characters introduced quite quickly, and probably more than my brain could really keep a handle on. I feel like if I had read a few of the previous books, I might have known who some of the characters were as well. Eventually things started to fall into place, and the ideas he was trying to get across were interesting. Still, I wasn't 100% sold on the style and the sheer amount of characters. I just think when you have so many of them to keep track of, you often miss being able to build their personalities.

While that was my view, my husband said he enjoyed the book just fine. I guess he has been for the whole ride with Pratchett whereas I left the train for a wee bit. Ultimately, this would be a great read for anyone who is a diehard Pratchett fan. As an introduction to his work, I would probably suggest starting with earlier stuff and working your way through the full 40 books in the Discworld series.

Thirteen-year-old Dan Cahill and his older sister, Amy, are running out of time. An exiled Cahill known as the Outcast has already recreated three of history's worst disasters, and he's saved the worst for last. If Dan and Amy can't find and stop the Outcast fast, he will initiate a full-scale nuclear meltdown.

But as Dan and Amy race around the world, they discover something horrifying. The Outcast's disasters ... more...