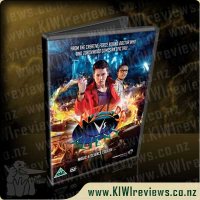 Aliens are intent on devouring all the magic on earth and only one 16-year old boy stands in their way.

Tom Clarke is a seemingly ordinary boy who loves football. He lives with his dad and grandmother in an ordinary house in an ordinary street - but there's something different about Tom. He has an astonishing secret - he's a wizard!

When the alien Nekross arrives on Earth hungry for magic, there's big, big trouble in store for all wizard kind.

Wizards vs Aliens is a series that comes from the makers of Torchwood. When we saw this come out on TV we watched the whole series. My daughter is a huge fan of Sarah Jane Adventures and Dr Who, and this show slotted in nicely as far as the things she loves about those shows. A little bit scary (she is 6), aliens and space, magic and kids as the heroes of the story. Another great British tween show.

The biggest name in the show is Brian Blessed, who is voice acting the main baddie. His very familiar, booming voice is great in that role. As far as I could tell, all the kids were new to TV. All of them were very good though. Tom and Benny are great as the heroic kids. There is a love interest girl or two along the way, but no main girl heroes apart from dottery Grandma. I think it could have been good to have a stronger female character on the side of good. Though one of the aliens is female and very strong minded, which my daughter related to.

The costumes and effects are in line with the Dr Who kind of world, though I don't believe there is a true cross over here. I like it because they are good enough to satisfy kids, but not so realistic that they are going to have lots of nightmares. We would definitely buy this on DVD because I know my daughter would watch it again and again.

I feel like this has been playing all day which it pretty much has the complete season totalled just under 5 and half hours worth of viewing so probably not best to watch all in one hit, which is what my daughter did. I watched with her for a while before my attention wained and I had other things around the house that needed to be done

The series follows Tom who is a wizard and must save the world from aliens. His best friend Benny did not know he was a wizard to start off with so Tom turns out to be not so ordinary and his friend Benny helps him in his adventures saving the world and wizard kind. The Nekross arives on Earth and has a master plan to take over but they must feed on the magic of Earth's wizards.

The aliens are really well done but seem quite old fashioned at the same time It reminds me of something I might of watched back in the 90's. Over than that the effects are spectacular with lots of explosions and magic happening in each of the episodes. They appear to be non stop action in each episode of the series.

You get to know Tom quite well and his personality really shows he is pretty down to earth really considering he is a wizard which is probably in part to his Dad who is non wizard who seems to keep tom well rounded. His magic isn't fully developed but his aunt who he also lives with helps him in learning how to use his magic Tom's mother had died although we do meet her towards the end of the series in the emotional finale.

I didn't watch every single episode through but I watched enough to get a feel for the series and actually quite enjoyed it, I think it is suitable enough for the whole family to watch as it was a television series it has been made in a way that there is nothing untoward and the alien attacks aren't that scary for the younger children. The series ended with the Nekross deciding to make endless clones of Tom's dead mother to feed on the magic of her. It ends leaving it open to the next season no big cliff hanger by any means but you still want to watch the next season to find out whether the Nekross master plan comes to an end.

My daughter really enjoyed this series I think if your children like the likes of Wizards of Waverley Place and the Harry Potter style movies then they will enjoy this series.

History with all the nasty bits left in.

Based on the best-selling series of books for kids (and adults, but they just won't admit it), Horrible Histories is an anarchic, surprising and unconventional take on history's most gruesome and funny moments.