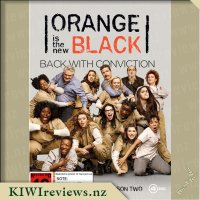 Orange Is the New Black (often abbreviated to OITNB) is an American comedy-drama series created by Jenji Kohan and first released on Netflix on July 11, 2013. The series, produced by Tilted Productions in association with Lionsgate Television, is based on Piper Kerman's memoir, Orange Is the New Black: My Year in a Women's Prison, about her experiences in prison.

The story of Piper Chapman (Taylor Schilling), a woman in her thirties who is sentenced to 15 months in prison after she is convicted of a decade old crime of transporting money for her drug dealing girlfriend (Laura Prepon).

I had really enjoyed the first season but had missed out on viewing season two on TV so I was most pleased to be able to view it when I signed up for Netflix. It took a little while to get through the season as I only watched it when a friend was over, and with five young kids interrupting all the time, this had to go on pause quite a lot as one can imagine. Piper wakes up in solitary and is bustled into a bus, onto a plane and into another prison with as much information as we were given, which is none.

During the season we get a couple more inmates, which adds more complexity to the show as we learn more back stories and more relationships between the new and old characters. I love how there are some things that we suddenly learn when we may have thought otherwise, as well as learning little secrets along the way. There are some funny moments as well as some sad moments, and sometimes combined together (though I can't give any details as my favorite moment is in the very final episode and I don't want to give away any spoilers).

Dannevirke Fantasy Cave is a treasure that is unique to New Zealand. It is a special place not only for the children but also for the "young at heart". Situated in Dannevirke's main street, it is readily accessible for those passing through town with plenty of parking in the nearby side streets.

Allow plenty of time to see all the exhibits - there is so much to see! There is limited wheelchair access to most of the galleries.