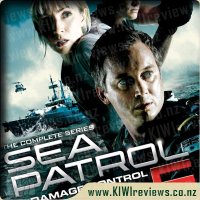 Sea Patrol 5 Damage Control follows the crew of HMAS Hammersley as they patrol the coastline of Australia, protecting the nation's borders. Every hour of every day, in all weather imaginable, young men and women battle the elements and the odds to defend Australia's borders and enforce its
economic zone.

They provide security, surveillance, protection, support and relief for the world's largest island, facing two of the biggest and most dangerous oceans on the face of the earth.

This was a great show and season five delivered. Tough decisions had to be made and poor Mike was really confused but it was finally cleared up. Some long ago attractions featured in the story, one of the crew find out that he has a son. The on again, off again romance finally gets cleared up, they had played the part really well over the five seasons and I'm glad it ended the way it did.

The season starts off with a bang, there was danger and lots of it. Again there was no central story but each episode delivered great story lines and some nail biting stories. There was a marriage proposal and decisions about futures, do they stay in the navy or go along the family path. There was also the issue of being in a foreign port and sailors getting married to locals, they weren't planning to. A double agent was discovered and a favourite crew member pays the ultimate price.

This was the last season of Sea Patrol, which is a pity as it was a great story and the actors played their parts really well. There were some characters who were loved and it would have been nice to know what happened to them. There was a short bit at the end where they said what happened and where each crew member ended up but still a bit disappointed in how it did end, there was so much more they could have done.