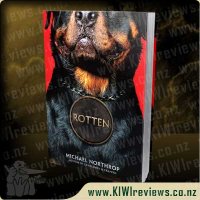 A gripping tale of a troubled teenager and a rescued rottweiler from critically acclaimed author Michael Northrop.

J.D. is back in town after spending the summer "upstate". No one believes his cover story about visiting his aunt, and it's pretty clear that he has something to hide. It's also pretty clear that his mom made a new friend while he was away - a rescued rottweiler that J.D. immediately renames Johnny Rotten (yes after that guy in the sex pistols). Both tough but damaged, J.D. and Johnny Rotten slowly begin to trust each other. But when the rottweiler bites Mars, one of J.D.'s so called friends, J.D.'s secrets he has tried so hard to keep under wraps start to unravel.

A riveting tale of heroism, loyalty, and second chances, this gripping novel will strike a deep, lasting chord with underdogs of all shapes and sizes

Harry Potter and the Goblet of Fire (Illustrated)
Rating: 10.0

A story about a boy and his dog, most of the story was predictable. JD comes home after spending the summer away, you do find out why and when reading the true story of where he was that summer I was thinking "is that it?" I was expecting something a lot more dramatic so that was a let down.

I really liked the character of JR, the dog who has been rescued so obviously he comes with problems but he slowly learns to overcome them. He bites Mars who is supposed to be JD's friend but his actions are not very friendly at all, although most are pretty predictable.

While reading the book I was hoping for a happy ending but for a while it was not looking like that would happen. This was an easy read but I probably will not read it again, there are too many other books to read to worry about reading this one again.

Rotten, a book named after a Rottweiler named Johnny Rotten, though the Rotten could also refer to the treatment that J.D. (Johnny's owner) gets from someone who he thought was a good friend (a boy of the same age called Mars). Johnny is a rescue dog, gotten by J.D's mother just before his return home, and is at first very mistrustful of males. When provoked he bites Mars and J.D, knowing that there was a reason why, attempts to save Johnny.

The characters are pretty run of the mill. J.D is a slightly troubled teen who doesn't want anyone to know where he really was during the summer. His mates are what you would expect as his friends. His mother is stressed and trying hard to keep thing going even with the threat of courts looming and J.D's love interest is also what you would expect.

Of course the real star of the book is Johnny, who was written so well that, if you like dogs, you can't help but fall in love with. He's written really wonderfully and you can easily picture this poor, mistreated dog who wants to trust and love but has nothing to base it upon having grown-up being unloved and hated. You get closer to the end really hoping that you do get the happy ending and that Johnny gets to live a nice and long life.

This was a really nice and easy book to read and I managed to do so in less than three hours. Nothing I didn't expect to happen happened, and I did find it rather predictable. "You won't tell anyone will you" of course has everyone finding out, the characters were very 2D and you knew how the characters were going to act and react. The reason for J.D's summer absence was quite a let down even for this story as I did expect something a little more/different.

Whilst the book was a simple read, it was a nice enough read, nothing you couldn't predict but the writing was good enough and a sincere enough main character that you want to read it just to make sure that you get the happy ending. A nice story.

To say this book is riveting or gripping is such an understatement I could literally not put the book down because it never felt like a good place to put the book down and stop reading I just had to keep reading just one more page and then another and another until the book was finished. Now I have passed the book onto my 11 year old and she is having the same dilemma it's 10oclock on a school night and despite my many attempts she is still not asleep, the light has gone out in an attempt to fool me but a torch has soon replaced the light source!

I loved this book and the storyline, having once my self rescued a little mistreated rottweiler cross puppy when I was a teenager myself I was instantly drawn to this story. The pair of Johnny and J.D is great with a troubled teenager and a mistreated rescue dog together they are both misunderstood in so many ways and really have a lot in common so they make a great match and the friendship that develops is really heart-warming.

I won't ruin the story for anyone but when Johnny Rotten bites J.D's friend Mars and the fate of Johnny becomes in jeopardy I found myself in tears just hoping that J.D. would find a way to rescue Johnny Rotten so that he wasn't put down. I desperately wanted the truth to come out about the attack and wanted to jump into the book and knock some sense into Mars who had me so angry.

I think this is a fantastic book for teenagers and would make a great story for any young boys who have perhaps been a bit troubled as it is really well written in a way that is really on the level with teenagers. The author does a great job of using teenage language and talking in a way that they can relate to even going as far as the occasional swear word. I don't mind my daughter reading the odd swear word in this book as the storyline is so powerful that I really wanted her to read it.

In the increasingly turbulent atmosphere of international politics, the once grassroots anti-globalisation movement has been slowly taken over by an underground radical anti-technology group fronted by the mysterious figure known only as Lazarus. All attempts to infiltrate the group have failed, the intelligence agents involved have all disappeared without a trace. Now U.S. Intelligence believes that Lazarus is preparing to make his boldest move ... more...