The Farmer in the Dell review 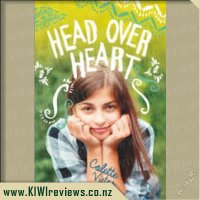 Thirteen-year-old Zeyneb is an ordinary girl juggling friends, boys and family. But, as a good Muslim girl attracted to a non-Muslim boy she has more difficult choices. Can
she be true to both cultures? And now that she's a woman in the eyes of her religion,
what does it say if she wears the headscarf that's a part of who she is?

When I saw the blurb for this book, I was really keen to read it... despite being well outside their target market which I'm guessing is around the age of the girl in the book. But as an adult, it's still fun to read teen fiction books for a quick read, and to get a perspective of typical teenagers (and in this case other cultures too).

Because this book focusses on a Muslim girl, I was first interested to know whether this book was aimed at other Muslim girls (or those from other minority cultures) or whether it was more broad than this. It soon became apparent that this is a book for everyone. Muslim girls will possibly relate to and understand some of the struggles that the girl in the book is going through, but other struggles are universal and it's a great way of opening up our eyes to things about other cultures that I certainly didn't know about.

I had a little giggle (and cringe) at some of the boy related issues the girl in the book was going through, and knew instantly that there would be heaps for other girls to relate to here, but it's worth pointing out that the girl is portrayed as someone who stands out from the norm for not being all about boys and make-up and so on, so it's nice to have the main character have some good substance.

Without giving away the ending, I just wanted to confirm that as a parent, I'd be more than happy with my teenager reading this book and that it portrays some great morals (despite the struggles and slight wrong turns along the way) and we leave her at the point where you can see she will be still making decisions and going through struggles for a long time yet, but she is definitely on the right track.

I'll be putting this book way for my young daughter to read when she is much older, and highly recommend it to anyone within the target age group and older.

We can't tell you who we are. Or where we live. It's too risky, and we've got to be careful. But everyone is in danger. Yeah, even you.

Sometimes weird things happen to people. Ask Jake. He could tell you about the night he and his friends saw a strange light in the sky that seemed to be heading right for them. That was the night five normal kids learned that humanity is under a silent attack - and were given the power to ... more...