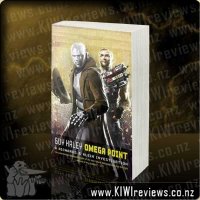 k52 is a vast artificial intelligence with world domination on its mind.

If it succeeds in creating an artificial reality based on our own universe, it could gain enough data to allow it to alter reality itself, turning k52 into the ultimate arbiter of mankind's fate. It's down to Richards and Klein to stop k52.

The Player of Games
Rating: 9.8

A Chair for Always
Rating: 8.5

This is the second instalment in the "Richards and Klein Investigations" series, and though I have not read the first book, it was clear that a lot happened in it because this story kept referring back to prior situations. This became a little frustrating, but only in that it made me want to read the other book.

The lack of access to that tale did not reduce the effectiveness of this story at all - there were no gaping holes in 'assumed knowledge' that fundamentally affected this plot at all. Haley was able to include enough snippets of 'prior knowledge' that you don't flounder through without full comprehension of what's going on, why, and with whom.

In my reading life there have been many stories that feature cyborgs and AI entities... but more often than not they are the "bad guys" and thus it is easy to buy into the whole "alien not-me" mentality. It's not often that I have seen BOTH as the "good guys" - an AI with a penchant for chrome android bodies (aka Sheaths, in this universe's parlance) dressed in 1960's Private Eye clothing - trench-coat and fedora ensemble - and a combat-boosted cyborg warrior with a strong dislike of virtual reality environments... in the world of this story, that's a pretty wacky combo, but they play together really well, with enough differences that they don't get a stale dynamic.

The premise of this story is a neat little twist on a few old tropes - AI goes rogue, takes over a massive computing complex, and tries to become God... think "The Lawnmower Man" (or more aptly, it's justifiably-underhyped sequel starring Matt Frewer) mixed with a dose of "2010: The Year We Make Contact", the impressive sequel to "2001: A Space Odyssey". In this tale, we see an AI trying to run an accurate simulation of the universe as we know it, with the end goal of protecting mankind from their own mistakes by accurately computing the future. This brings up all sorts of questions regarding predetermination vs free will - is the universe a giant clockwork such that if you know where everything was, and where everything is, can you then calculate where everything is going with any accuracy, and thus is chaos theory and the Uncertainty Principle simply a case of not seeing the most subtle of predictable interactions? This is a mind-bender of epic proportions that has been around since before Socrates.

Overall, this was a tale I really enjoyed, despite a few strange detours that didn't make much sense at first. Haley was able to mesh all these disparate threads into a coherent tapestry with consummate skill, leaving no unanswered questions. This may hamper continuity with any future stories in this universe, but it also allows for total plot shifts without any harsh breaks that need to be resolved. I was especially pleased with the 5-page section right at the very end of the book, entitled "Incidentally... writing the future" wherein Haley explains the rational behind his choices regarding the future world he built. Using today's knowledge, state of nations, population growth rates, etc. he was able to build a very good rationale behind the sociological and geopolitical structure of his world... and it holds together well enough to be at once fantastically futuristic and also quite believable. I look forward to the next tale from Richards and Klein.

Its winter at Pine Valley Ranch and Maddy and Snowy are both wearing warm woolly coats! Its also time for the young foals to move to the new paddock, away from their mums. But little foal Sunny isn't ready to leave yet. Can Maddy, Iris and Snowy catch the runaway?