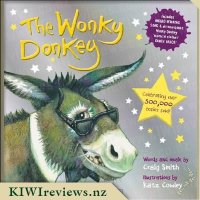 In this very funny, cumulative song, each page tells us something new about the donkey until we end up with a spunky, hanky-panky cranky stinky dinky lanky honky-tonky winky wonky donkey, which will have children in fits of laughter!

There is much fun to be had by listening to the song and trying to predict the new word for each clue given.

What a wonderful book! Even the cover is different, with embossed stars that little fingers can trace and a CD tucked into the back. So before I had so much as opened the book to check out the actual story, it had been whisked away to floor level where the children could inspect it. (I was looking after a friend's children, a three-year-old and a four-year-old, and they just love to see new kids' stuff.)

Once they had satisfied their curiosity, I suggested that we all sit down together and read the story. But no - we had to listen to the music first. I gave in. After all, I had brought it to share with them, so the music was duly put on to the CD player. I watched their faces as the music started. Miss Four was enchanted and very quickly tried to sing along with the words. Miss Three could not work it out at first but then she too realised that the lyrics were hilarious and she got the giggles.

We listened to the song to the end, and then along came the musical statues dance track. If the first two tracks had not hooked them in, the third one certainly did. All three of us stood up and the two girls quickly got the idea. Unfortunately, it was over too soon so we just had to put it on again and have another dance.

Because they had already heard the complete song four times over by this stage, the girls were now ready to sit one each side of me and enjoy the story itself. We talked about the three-legged donkey and how he never let that stop him, and they admired his artificial leg. This led to a discussion on disabilities and how people still manage to cope. They know about my own three-legged cat so they understood exactly what the issue was with the donkey.

Finally, after a good four minutes spent discussing the first illustration of the donkey, I was permitted to start reading. And this was great too. Having become familiar with the words through listening to the CD, the girls were able to join in with the song words on every second page. Of course, we had the predictable pre-schooler amusement when we reached the page featuring the stinky donkey whose flatulence is so bad that it makes the bird faint!

I cannot emphasize enough how impressed all three of us were with this book. Miss Three had been in a bad mood when she arrived at my place, but the book cheered her up and she forgot all about being antisocial when she heard that the donkey was cranky too because he had not had his morning coffee. She looked at his frown and declared that she was not grumpy any more. Full marks to both author and illustrator for a superb production.

We were so lucky to be able to review The Wonky Donkey special Platinum celebration issue. I am not suprised that over 500,000 copies have been sold. What caught my eye to start with with this book was the amazing sparkling cover. Miss 2 opened the package and immediately said "wow mum look its sparkly and there is a donkey". She reads the wonky donkey at her daycare so immediately was excited. She knew it was different to the daycare one and started pointing out the differences (the sparkles, the stars on the cover).

We grabbed down the CD player and popped in the CD and begun to sing along. It is such a catchy and fun book with a heap of tongue twisters. Its a book where if you are singing along you need to be quick and it provides a lot of laughs.

The illustrations are fabulous and really portray the donkey in all his glory. His eye patch, his stink,, his three legs etc which all make for a fun discussion talking to your child and wondering how the wonky donkey managed to get his three legs! The pages aren't crammed full of too many things to look at so it makes the main character stand out and you can focus on him and what he looks like.

We were excited to see there was a bonus track of musical statues on the CD so gave it a try. Miss 2 danced around like a crazy kid listening to the instructions and trying to copy them. We played this track several times and it held her attention for quite some time. I think we listened to the track 5 times on musical statues before she had had enough. I can't wait to take this book into daycare when I start back teaching and share it with the older children.

Another amazing book by Craig Smith with another great and fun story to listen and sing along to. This is now the top of the book pile for me to read to Miss 2 before bed.

We were lucky enough to be chosen to review this Platinum Edition of the Wonky Donkey, which my almost 3 year was over the moon about, with The Wonky Donkey being one of her favourite books which we didn't actually own ourselves!

The Platinum Edition of the Wonky Donkey was released to celebrate over 500,000 copies of the Wonky Donkey book sold which is very impressive and an absolute credit to the author of the story Craig Smith. If you have read and listened to the story of the Wonky Donkey before it is easily understood why this is such a popular children's book, with such a funny, humorous, catchy and silly story line that appeals to young children especially with the CD which is very easy to sing along to and pick up the words to once you get over the tongue twister that is. Young children, including my 2 year old get the humor behind each of the pictures, and this is what helps to make it such a fun book, even the 4 year old boys at the centre I work at love it with it being one of the most requested stories, which is saying something as it can be difficult to get them to listen to a story a lot of the time, but this story creates a room full of giggles and laughter each time it is played, and it never gets old! The illustrations are very well done and definitely add to the humor as you look at the corresponding pictures while listening to the CD, they really represent what is happening in the story.

What makes the Platinum Edition different from the original copy of the Wonky Donkey is that is that it has a special holographic book cover which does add that little bit of special to the book. My daughter loved making rainbows with it by tilting the book and by holding it up to the sun and making reflections that bounced off. On top of having the holographic cover the CD also features a new bonus Wonky Donkey 'musical statues' dance track. My 2 year old loved this and now asks to do her "silly donkey dancing", while this is meant to represent somewhat of a game of musical statues my daughter was more interested in just dancing like crazy rather than playing the game, as were the 3 and 4 year olds who I tried this out on several times at the daycare centre I work at. They loved doing all the silly things that the Donkey did such as blinking one eye and pulling there best good looking faces. A fun addition to the original book.

As a parent and a Early Childhood teacher I totally recommend buying this book great value for money, hours of fun and not a book that will get old any time soon!

Much-recommended by new mothers, this is the only book you'll need for the best baby advice Refreshingly honest, openly frank and candidly blunt, this book has been written by a mother for other mothers. It oozes with warm fuzzies, it reeks of mumsy terms, it exudes realism in every paragraph and it is refreshing in its guiltless honesty.